Bullshit Narrative 3- "No Law Could Have Prevented a Determined Actor." 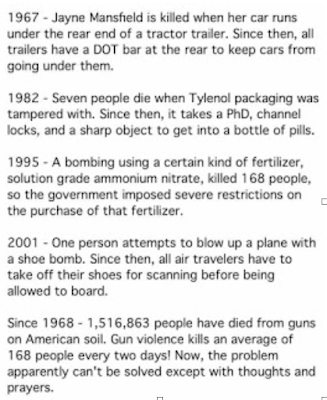 Previous Bullshit Argument: "Don't Politicize It./It's too soon."
Or all the way back to the menu.
This is logically meaningless. It's claiming to be omniscient about causality. Bad argument, good chap. (Sips brandy.)

It would just as logical to say: "He did it, but ANY law could have prevented it." Maybe if there had been an extra stop light on the way there, he would have had that much longer to think about it and changed his mind or gotten thirsty, gone to the Subway first and met up with someone he fancied in fourth grade. The point is we don't KNOW and using that umbra of ignorance to presume that nothing could have made any difference is at least shitty critical thinking.

But perhaps more to the point is its implication. According to this logic, we should have no laws. Ever. For any reason. Because they won't stop 100% of bad things from happening and won't prevent a determined actor from doing whatever it is any way.

This is not how society societies. Hell, it's not even how humans human. From the first time Ug said to Oog, "You no eat best part of elk if no kill, or you not come next hunt," humans have understood the concept of a deterrent.

We don't throw up our hands and say "what could possibly have changed this" when children are dead. Even if it's an earthquake or tsunami or something, we STILL come up with better building codes and better preparedness.

We banned lawn darts after one kid died.

Tide pods are now in lock-up in the grocery store and have disclaimers and a bitter tasting coating after a few people went to the hospital.

I have to take my shoes off every time I fly because of that one guy with the shoe bomb twenty fucking years ago.

We didn't throw up our hands and say "What possibly could have prevented this? Certainly no law. Guess I better tweet something poignant."

We only do that with one thing: guns.

Bullshit Rating: Mammothian pile growing mushrooms out of it.
at September 17, 2019