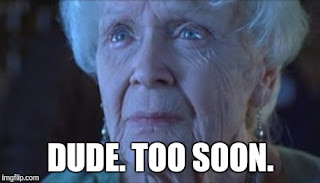 Previous Bullshit Argument: Silence
Or all the way back to the menu.
Actually...it's too late.

We should have been talking about it yesterday.

Did you know I drafted a little over half of this article in the days right after Parkland, came back after Santa Fe, started retooling it after Gilroy determined to set aside time for it after Santa Fe and Dayton. (Although Odessa had happened before I managed to start.) I did not write this in the last few days. Life kind of turned up to eleven and it's a HUGE article, so it went on the back burner. And to my horror, and this country's shame, I knew that we would be here again in time, and this article would be topical.

This is where we are as a society right now. In the umbra of absolute certitude that this is going to keep happening. [May 2022 edit: And did….again.] Literally locked in a cycle where I can be talking about the MOST RECENT school shooting and not even miss a beat.

"Don't politicize this" after an unforeseen tragedy, by someone who shoehorns it into an agenda that is only tangentially related, is a reasonable reaction to some partisan spin and politicians with particularly cavalier moxie. Things like the PATRIOT Act with its surveillance and torture exceptions being whipped up before the country could think straight after 9/11 is politicizing a tragedy.

In August of 2002, George Bush Jr. stood in the aftermath of a wildfire while the ground was still hot from embers and announced that he was going to allow more logging so that forests would be "thinned" and nothing like this would ever happen again.

That is politicizing a tragedy.

If this were a Bascule bridge that failed every few days and sent people to their deaths, the engineer would not be politicizing it to say "NOW will you listen to me?" after each fresh death toll.

Standing in the carnage of yet another school shooting and saying "We have to stop this" is not politicizing it. And only the people callow and superficial enough to consider the slightest gun regulations a partisan issue would claim so.

Even if this weren't rich, first-rate hypocrisy from many of the same folks who cheered and "heart" reacted when their leader tweeted a snide remark about a gunner at a baseball game being a Bernie supporter on the same day that it happened, who decried the Las Vegas shooter (inaccurately as it turned out) for liking Rachel Maddow, who posted pictures of Cruz in antifa attire (also inaccurate and fake) within hours, and who (and we can't underscore this enough) fucking always always ALWAYS bring up the shooter’s political agenda immediately if they aren’t white (remember the Pulse shooting?)

Even despite all that hypocrisy, "Don't politicize this" is just a way to silence people–to guilt them into not talking about the safety of their own loved ones and how we might change a situation in which this is anything but unforeseen or unpredictable.

When else are we supposed to talk about it? A day later? Two? After the funerals? You know the cycle is getting so tight, we don't really have that much time until the next one. Can we all just pretend we're talking about the one-before-the-most-recent-one? And even though Tomi Lahren's bullshit guilt trip might get some traction because she invokes the ol' "The bodies aren't even cold" line (a frequent enough staple at Fox news to make me suspicious that someone has done some market research), it is designed only to silence anyone who isn't ardently pro gun.

Here's the problem with that: When the bodies do get cold, the NRA and its ardent supporters hope people will have have forgotten. Not forgotten forgotten of course, just political-will forgotten. Just calmed down a little–enough that they'll go back to their other priorities, and get mad about Russian interference, the latest tweet storm, and the West Bank and forget about all this unseemly business come donation and voting time. They hope most folks will be inured and numb and won't donate to Moms Demand Action or The Brady Campaign (or whatever).

Because what these gun advocates want more than anything else is for everyone to just fucking drop it. So they can go back to their #1 narrative of silence. They want their guns and they want them without regulation, debate, compromise, oversight, or anyone even fucking saying boo to them about it when someone shoots a bunch of children. And when folks are not angry anymore, they're less likely to take political action. This is how they continue to wait us out, and nothing changes.

Plus, not to put too fine a point on it, but they are going to be politicizing out of one side of their mouths as they try to shame people for doing so out of the other. It's not like they waste any time jumping in front of a camera and saying that what we need are more guns or armed teachers or whatever the fuck. It's not like they waste any time sending out the cry: "After this last shooting, your freedoms are under assault again. Please donate now so we can defend your civil rights!" NRA funding goes UP after every shooting. They're actually MAKING money off of this shit. 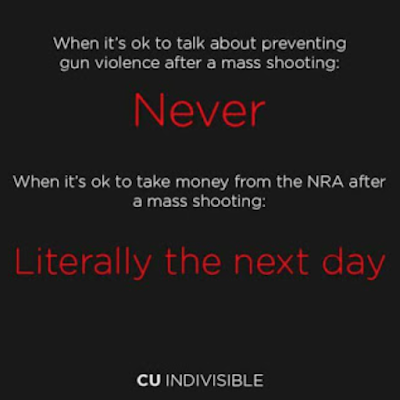