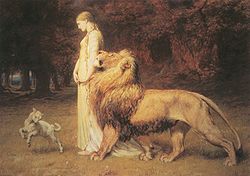 Good evening, I'm Guy Goodman St.White your outrageously British sounding host, and tonight we will be taking a glimpse at Sir Edmund Spencer's The Fairy Queen.  We are entering a period of history within our exploration of the important British part of the canon where there are a number of quite spectacular authors of incredible skill and literary prowess who nonetheless decide to delve into the dregs of speculative fiction for some ungodly reason.  Maybe they just liked having unrealistic works that couldn't possibly reflect the human condition.

Maybe it was all that opium they were bringing in from India.  I don't purport to comprehend.

Ranked highest among these wayward genre writers is Sir Edmund Spenser.  Despite Samuel Johnson's disdain for it, Spencer really should have stuck to the gritty realism of his pastoral poetry, with its banal depictions of cleaning stalls and husbandry, but instead he succumbed to the methane fumes and decided to write one of the most blatantly genre pieces in all of English literature.  Spencer quite literally sets out to create a transparent allegory about Queen Elizabeth and England.  And let me tell you without any equivocation, he succeeds magnificently in his quest to create really-genre genre writing.  If I were one of these young online hooligans, I might refer to it as ubergenre.  High fantasy, speculative offal oozes off of every page in an affront to everything for which good literature stands.

I was very excited when I picked this up.  I thought it was going to be about a gay cross dresser whose parents did not understand his lifestyle choices.  You know...the stuff of REAL literature.  Instead there were knights and satyrs and magicians and not literary fairies that reflect the human condition, but the stupid folklore kind with their bollix wings and shit, and the whole thing was just a train wreck of one cliche image after another, excused by Spencer's rationalization that they were symbolic.

In a plot that would make the makers of the Warcraft saga say "Damn, this is convoluted!" Spencer literally DE-banals England's political situation with every work of genre fiction he can muster. From the first canto of the first book to the seventh canto of the third book, The Fairy Queen is a non-stop barrage of unrealistic, high fantasy imagery taking the idea of being genre simply for its own sake to the meta level. Honestly, where is the black death, the dysentery, the ravaging of heathen women, the armor chafing so bad that it smells like spoiled chicken, and of course the homoerotic subtext. That is the stuff of REAL stories of medieval knights? This genre bilge knows nothing of the human condition.

The canon for some horrid reason is filled with speculative fiction tripe, but none is quite so guilty of going down the genre rabbit hole as The Fairy Queen, and bloody Edmund Spencer with his bloody knighthood.  So I'm going to have a brandy or six while I think about how so much of this unrealistic bilge somehow became important to read even to a vaunted ideologue like Harold Bloom (peace be upon him).  Please join me next month for another episode of Speculative Fiction Sucks Balls (And Not In the Good Way).  I'm Guy Goodman St.White.  Not SIR Guy Goodman St.White, you'll notice, but just the regular kind who knows good literature when he sees it and bosh when he sees that.  Regardless...good evening.
at September 20, 2012