To the readers of Writing About Writing,

I'm looking at a letter from Chris that he left on his desk (apparently) before leaving this morning on some damned fool idealistic crusade. I'll just cut and paste it verbatim.

Gotta go find the SciGuy and convince him to come back to work at W.A.W.  He's the only one that can keep us from getting hacked by the Bad Advice Bears again.  Can you have one of the guest bloggers do some "jazz hands" entry or something.  Oh and if Leela gets back with the sisters she's bringing, please make them feel at home.

Also, don't eat all the Somoas.


Just to be clear, we don't know who hacked us last Monday and gave out such spectacularly bad advice.  I'm not sure why Chris thinks it might be bears.  It's far more likely to be humans given their linguistic mastery. 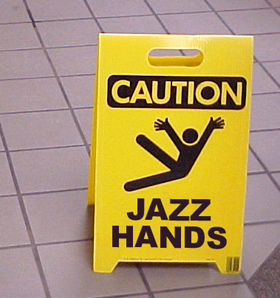 Anyway, all of the guest bloggers are out of the office on Wednesdays, so I guess it's up to me to do "jazz hands."  First I spent an hour online researching the term, and I think I have a good idea of what is required of me.

In my case, however, you will have to settle for Jazz Tentacles.


So as Chris's administrative assistant, and someone close enough to his office to hear the random cursing that goes on when he's in his office, plus the person he laments too the most when he's had so many 5 hour energy drinks that he has to sit perfectly still or risk tachycardia, I am often aware of troubles here at W.A.W.

Chris would love it if you all would participate more.  He would love to get comments, suggestions, questions, and generally lots more dialog, so that Writing About Writing is a little less of he and his guest bloggers on soap boxes and a little more of a conversation.  He recently asked for more input on what kind of posts and segments he should focus on in the future, but cries into his pillow at night because no one has responded.  Of course he has flung opened the door to anyone who wants to be a guest blogger, which is of questionable wisdom, at best.  He has even begged for more questions and comments that he could reply to or write about in the Thursday Mailbox segment.  He currently has a handful of silly questions that he can make a post out of (for tomorrow....if he's back by then), but he'd really love to get some good questions.

So I hope you all get involved.  Not for Chris's sake, mine, or even W.A.W.'s sake but just because the power of social media is that it doesn't need to be passive.  There can be a dialog here and a certain sense of community.

I hope that's enough jazz hands.  I'd hate to think I did an insufficient amount.

I would like to leave any of you who might be struggling writers with a ray of hope (wrapped in a giggle or three).  Cracked has recently done an article called 5 Hilarious Reasons Publishers Rejected Classic Best-Sellers that's all about how publishers first turned down books like Harry Potter or Animal Farm.  Publishers aren't judges of what's worthy.  And sometimes they don't even know what's going to make money.  And they may deliberately skip something that is "good" if they know it won't sell.  So don't put too much stock in them.