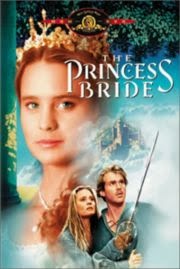 February's Poll has lost a little steam. Partially because I'm not running around the internet hectoring people into voting, but mostly because The Princess Bride took an early lead and left the other movies in its dust. Yes, yes, let's all take a moment to act shocked that Rob Reiner's fricken immortal classic is probably going to be voted the best adaptation and surreptitiously whisper that we're pretty sure those people just watched the movie and didn't really read the book.

Got that out of our systems? Good. Because there's still every other position on the poll still to figure out, and some of them are neck and neck.

However, the runners up are all in a massive close race for second, and that could be anyone's game. So if you haven't voted yet, care deeply about those second placers, or just want to round up twenty friends to topple The Princess Bride, you have just a little over a week left to vote.

The poll itself is on the left hand side of page all the way at the bottom of the sub menus there.  It's long and thick and black and somewhat innuendoish. Everyone gets three (3) votes, but there is no ranking so using all three "dilutes" their potency.

Just remember this is a poll about movie adaptations, not the movies themselves. While every movie must change some things, did the adaptation stay as true as possible to the source material? This is NOT just a poll about which movie you liked most.

Also....prepare to gear up for the write in portion of March's poll. We will go back to one of the first polls I ever wrote here on Writing About Writing, but with a twist of breaking down further by genre and breaking it into decades. So hang on to your thoughts for now (the actual post will go up in a couple of days) but in the meantime consider the best SCIENCE FICTION series OF THE EIGHTIES.
at February 20, 2014