The Mailbox: Best Answers EVER. 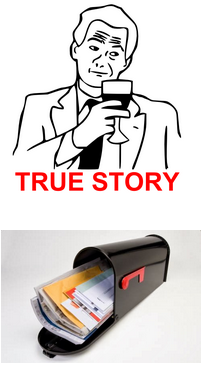 The worst best advice ever: How much revision should I do? Do you have any suggestions for how to improve my grammar? I feel like I just don't have talent. How much reading should I do if I am serious? You make $1200 a year and growing--how can you complain?

[Remember, keep sending in your questions to chris.brecheen@gmail.com with the subject line "W.A.W. Mailbox" and I will intercept them and answer them for him (because he is a total tool).  I will use your first name ONLY unless you tell me explicitly that you'd like me to use your full name or you would prefer to remain anonymous.  My comment policy also may mean one of your comments ends up in the mailbox.]

Hi all! Your white knight here to drop some really real wisdom on you about how to be a writer, and kick start your career faster than the comments get ugly on an online post about feminism. I have intercepted your e-mails, and now I will answer your questions with some actual advice instead of that tripe Chris likes to dispense about work ethics and revision and shit.

How much revision should I be doing on my NaNoWriMo novel?

The real question you should be asking, Mark, is how many editors the publisher is going to assign your book once they read how fucking awesome your idea is! Because when you're a winner, people come to you. When you're a loser, you go to them. And when you're a complete and total loser, you do their job.

Work on the idea, Mark, not the writing. Anyone can write. Not anyone can come up with a killer concept.

Writing isn't a skill. It's a talent.

My daddy used to tell me if something was worth doing, it was worth doing right. So if you've spent some time thinking about this idea, you shouldn't need to revise it at all. That's why you wait for inspiration and write a perfect draft when you sit down the first time. Otherwise you'd just be writing a bunch of crap. Wait for inspiration before you sit down, and then you only have to do it once because it's a good idea.

Oh sure, it's going to need a polish for grammar, and a few loose ends. That's what those pedant word nerds are for. Revision is for people who didn't do it right the first time.

Do you have any suggestions for how to improve my grammar?

Here's my suggestion: Fuck grammar. Grammar is for tools.

Writing isn't grammar. Writing is art. You don't have to be some fucking English teacher to be an artistic genius. Grammar is a bunch of stupid little rules.

Grammar is only important to people who are going to become copy editors or Professional Tweet Responders (PTR's as I call them). In other words, the people who will be assigned to clean up your genius novel. Let them do the pleb work. It's your job to come up with the great ideas. And once they see how awesome your idea is, they won't care if you've left out a comma or two.

It's all descriptive anyway, right? I mean if enough people say literally can be used before hyperbole, then that's what happens, so who cares if you're wrong. Just tell them what you meant. You don't need to learn the conventions or why rules are being broken by some groups or how to impress the eight or nine people who actually care about this stuff. Let them go be stuffy somewhere else.

What's important is your ideas. If they are off the hook inspired then you will have a million pencil pushing nerds crawling over each other to fix your grammar for you. If you sit around and learn what a participle is, you're never going to come up with those genius ideas in the first place.

Who the fuck thinks writing is about being some grammarian?

I feel like I just don't have talent. I wrote a story for NaNoWriMo this year, and then I wrote a sequel to it in December, but in January I stopped writing, and now I can't think of anything new.

It's possible you don't have talent, Moira. Not everyone does. But you managed to write two novels in two months, so I'm guessing you're at least kind of a genius.

Welcome to the club.

Look there are a bunch of fucking stupid a-holes out there who would suggest that the reason you can't write right now is because you stopped writing for a month and a half like it's some kind of thing you have to do every day or it will go away. Like a muscle that's out of practice or something. They're going to tell you to get back to daily writing or some shit.

They'll probably also tell you that one month is too fast to write a novel and that you need to rewrite it and then revise it. They're just jealous motherfuckers who want to tear down your crowning achievement.

These people think writing is a skill.  Writing is not a skill. It's a talent.

What's going on, Moira, is that you can't be genius all the time. You have to let your inspiration recharge like a tesla coil after a really hard discharge. (Or me after a six-shot marathon of epic sex, if you know what I mean. [Call me.]) Creativity isn't a muscle or a habit. It's a gift that comes down from on high. And if yours gave you two novels in a row, you're going to have to wait for it to recharge.

I strongly suggest you relax. Let your batteries recharge. Send your two novels off to publishers (several publishers at a time) and start getting them to fight over who will publish you. Don't worry if they send them back--true genius is hard to recognize. In the meantime watch some Game of Thrones and start a wishlist on Amazon for all the shit you're going to buy when you get your advance checks and royalties start rolling in.

How much should I be reading each day. I am serious about wanting to be a published novelist.

The only reply that matters:

Reading is not that important to being a writer. What you need--what you really need--is talent. The people who tell you that are the ones who want you waste a bunch of time reading that you could be using to come up with more ideas for awesome books.

If you're reading more than a couple of hours a week, it's way too much. Use that time to network, brand, get your talent recognized on Reddit and Tumblr because that's what's going to supercharge your career--not some stupid book.

If you want to relax with some entertainment, watch movies, play video games, and read comic books. Those will inspire you and teach you about narrative arcs and stuff. They are way more useful to a writer than reading.

You make like $1200 a year. That's enough to buy a computer or go on a nice vacation. How can you still tell people that isn't very much??!!??!!??[sic] God I know so many writers who haven't made anything yet. You are spitting in their face.

My reply to Chris's question:

Chris is right to think this is pathetic and not worthy of his time. Writers shouldn't go in for those small payouts. It should be one massive payday or gee tee eff oh.

$1200 might sound like a lot of money all in one place, but you've got to understand that Chris gets this over the course of an entire year. That means he makes about $100 a month. Well he spends 25-30 hours a week on this stupid blog. So really if you break that down to hourly, he's making about a dollar an hour or less.

If he were a real writer, he would write a book and go make a million dollars.
at February 21, 2014