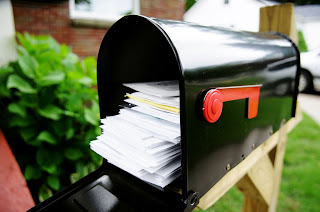 How do I stop editing something to death and move forward with writing.

[Remember, keep sending in your questions to chris.brecheen@gmail.com with the subject line "W.A.W. Mailbox" and I will answer each Monday.  I will use your first name ONLY unless you tell me explicitly that you'd like me to use your full name or you would prefer to remain anonymous.  My comment policy also may mean one of your comments ends up in the mailbox, but likely only if you ask a question. Incidentally that link is also where to send fan mail, flirt with me shamelessly, or message me about how to put me in your will.]

What do you do if you've taken a break from a story, come back to it, and only edit what you have instead of pushing forward?

That seems to be a trap I fall into a lot. My editing sprees tend to throw out the baby with the bath water.

Okay, here's the truth: I'm going to bloviate for about fifteen paragraphs and let's hope I kind of answer your question.

When I was in my writing program, we regularly had to learn the power of revision by having a major project due for presentation (we almost always presented to the peer groups) and then a major revision a week or so later. You could really see the difference the revision made. And you could really see what someone had tried to do when they revised. Themes were teased out. Conflicts sharpened. Everything got crisper. Better.

There were two types of students who had a really hard time with these revision assignments.  Well there were like twelve kinds including the dude who thought he was totally Stephen King and wrote about lesbians who bit the clit off of....you know what maybe I'll just tell that story some other time.  Anyway, two types are important for this article.

The first just couldn't let their babies go. They would read their revision and they had changed two or three lines at the most. It was basically the same. Muddied. Unclear. Often uninteresting. One of my teachers liked to say that revision is where you turn up the heat, and these drafts had no heat. It felt like a first draft in need of revision–which was essentially what it WAS having not really been revised.

This is almost always a problem of a writer being underread. As in the writer has not spent enough time reading (not that not enough people are reading them). They have an idea in their head but they don't know how to make the language more precisely reflect that. It's one of the reasons the most ubiquitous (and unfortunately, also frustrating) bits of advice that young writers get is to go read a LOT more. It's because they need to hear good writing (and what NOT to do from bad writing) to develop a much more sophisticated "ear" for whether the words are saying what they're trying to say. Good writing takes a lot of reading and a lot of writing practice. (And is why editors are so valuable to writers.) That's a tough bit of feedback when what you wanted to hear was: "You're missing one comma, but otherwise it's brilliant and here is your book deal."  Understanding how the writing process works like polishing a stone through a series of refinements that makes the language a closer and closer reflection of what's in someone's head can (while at the same time revealing what was underneath) be a tough process of letting go of that initial ego, the effort sticker shock, and a lot of misconceptions about art and "talent" and how we're just supposed to be GOOD at it.

But there was another type. (Read that in a Kate Blanchett Lord of the Rings voice over for maximum effect.)

They were rarer, but one or two showed up in every class. Their edits went the other way. They would change everything. It was almost a whole new story. They would look sheepishly at the class (or group) before reading. "I changed a few things...."

This wasn't a case of an "amputation" bringing forth a better vision or tectonic upheaval giving the underlying heartbeat new life. This was them eviscerating completely their original version (and vision) and replacing it with just a familiar hint of the old story–character names and mannerisms, and maybe a plot point or two. It reminded me a little of Tibetan sand mandalas to watch them put so much effort into something and then wipe it away. And the way classes were structured I often saw the same people do this over and over again.

I'm guessing this is roughly what you mean when you say you're throwing the baby out with the bath water. Gee it sure would be awkward to have gotten this far and be wrong.

*scratches the back of his head and looks around nervously*

As you can imagine, the end result of this was much the same. Writers need to revise and these writers' second, third, and fourth drafts all suffered from the same lack of focus, cohesion, and linguistic mud that a rough draft would. Because essentially they WERE rough drafts. They weren't writing five drafts of a story, they were basically writing five different stories.  Each one was so thoroughly edited and changed that it essentially was an entirely new piece.

Believe it or not, once I'm done telling you why this happens, you might wish I'd sent you off to read some untold number of "MORE BOOKS" in order to develop an "ear" for good writing. Because it's even more touchy, more feely, and more nebulous and hard to pin down.

Gabriel, you have to trust yourself.

Now if you love what you're doing, and it's bringing you bliss, forget everything I'm about to say. That's all the best parts of art and if you're getting the catharsis, you win the grand prize. But if you're vaguely discontent at your ability to sell, publish, finish, or stick with a story, then here is what I'm going to tell you.

Right now, you don't trust yourself. You don't trust your own artistic vision. We all question our writing once the slick sweat of that initial creation is over. We all wonder if it's good enough. When we come back to it, and see it with the editor's eyes (which we should do) we are seeing the flaws. The chasm between our hopes and the language on the page. We question its merit. And we think, "Why even bother?" instead of "This needs surgery, but there's hope." Will they believe this? Is this idea even important? Is this character remotely believable. Why would anyone read this?

You start to edit in a way that basically gets you back into that high of initial creation. But eventually you'll have to look at this new version too.... 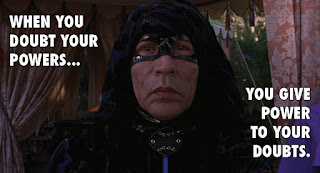 Instead, take a deep breath and trust yourself. You have to let that go. That fear. That doubt. (That bit of dialogue you're totally ripping off from Morpheus's speech in The Matrix jump scene.) They will believe it....if you make it better. That idea is absolutely important....if you can word it right. That character is believable....if you just revise them instead of going tabula rasa. They're going to read it because it's good....if you take the time to make it good.

Look, some stories definitely belong in the trash can, but you're not going to know that if you keep editing the shit out of them so hard that they're unrecognizable and you never get past a first draft. And if you know it's a bust from the minute you glance at the rough draft, toss it. Don't edit it; throw it away and start over. But if what I suspect is happening is happening, that story is calling to you.

It wants to be told.

It needs you to trust yourself to smooth it's rough edges into the shape you want instead of using dynamite and blowing the whole thing up over and over again.

As far as your first paragraph of questions goes those are simpler fixes.

A) Don't allow yourself to edit if that's a problem. I know that sounds like the doctor joke: "Doc it hurts when I do this." "Don't do that." But seriously that may be the easiest fix. Just don't edit. At all. Only read the work to get back into the headspace then make yourself write forward, and only allow yourself to do revision when it is completely done. Forbid yourself any editing. Bite your fingers mercilessly should you slip.

B) It sounds like you're sessions with your work in progress are spaced SO far apart that you are returning to your story a stranger. That can be tough because you've forgotten a lot of the momentum you had. I wrote a list of ways to rejuvenate your old enthusiasm here. (It's a whole other thing, so it needs a whole other article, but basically don't just go after it with a hatchet.)

C) If your sessions are spaced so far that you're always returning "a stranger," see what you can do to find some time closer spaced even if it's just writing a sentence or two during the busy days between your power sessions.
at January 23, 2018