Probably every kid has a Death Hill.

I don't mean that probably every kid has some metaphorical analog to Death Hill. I mean literally 90% of kids probably had at least one hill somewhere in their childhood called Death Hill That's how kids name things. Ridge of Doom. Slaughter Creek. Massacre way.

When you're thirteen, the world is in danger of becoming a lot more pedestrian than you hoped it would be, and that sense of adventure is hard to come by.

My Death Hill was a bike path on a half developed (and then abandoned for some reason) housing tract. The ground was level at the top and level at the bottom and on the hill between them a flattened section of the dirt hill made a passable bike path. We all knew a friend of a friend from the town over whose cousin had totally died on Death Hill. And each of us was sure we were the only one lying about personally knowing that kid.

Let me drop some truth though: even though my personal Death Hill was conquered back in the eighties before kids would be caught dead wearing helmets, I'm pretty sure you would have to strap some sort of explosive device to your bike to do anything more than skin your knees and forearms but good. Perhaps....perhaps there was some grain of truth to the legends, but Broken Arm Hill didn't have quite the same gravitas.

I would be the first of us over Death Hill that day. I was always racing where angels feared to tread––more a testament to my foolishness than bravery as private property, high security government contract campuses, and the occasional not-abandoned building were on that list. That day would be no different. And halfway down Death Hill, when I realized for the first time, it was possible I wasn't actually going to crash (unconsciously reinforcing some formative lesson about risk versus reward) I felt like I had smiled at the face of mortality.

What I remember most was looking over the edge. It was probably a 45 degree angle at the outside, had been pressed pretty flat, and might have been an elevation change of 20 feet at most, but when you were looking down it for the first time it felt like half a mile straight down....with jagged outcroppings ripe for the impaling. We all looked over the edge for a long time until, one by one, we found our courage.

Writing About Writing (and my writing career) is about to undertake the most major change it's ever had since this blog's inception. We're not just fiddling with the knobs this time. We're going back in to rebuild some of the core assumptions about content.

This last week I didn't get much posted, but over at Patreon, the back channels were alive with chatter. ("And tier rewards too if you want to get in on that!" he said with his best salesman pitch.) This is part of a longer conversation I've been having with those who help keep the lights on around here (and me fed) about what they'd like to see from me and how often. A few months back, I posted a question about quality vs. quantity. As always, I was harder on myself than my patrons would even dream of being. 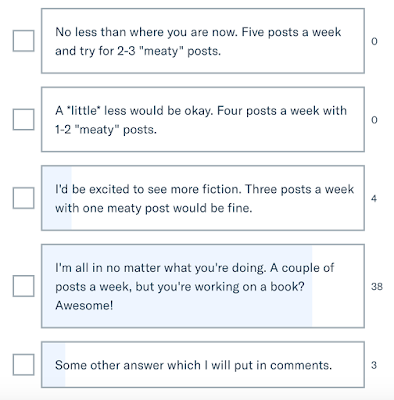 The short version is I've been working too hard. I've had no appreciable work/life balance as I slam out 50,60, and sometimes 70+ hour weeks. I was perpetually reminding myself to take it easier (and finding I actually had difficulty doing so). Probably chasing blog analytics helped me not feel like such a fuck up after what pragmatically amounted to a divorce, but it also affected my mental and sometimes physical health. It was just so easy to keep going...to always be behind and overwhelmed. Then you don't have to slow down and listen to the voices.

This is as much a process happening between me and my therapist as it is a blog reorg.

Also, and perhaps most frustratingly, I ran out of time to cannibalize for ever more writing, and still wasn't getting to the writing I wanted to be doing. I've been so busy writing blog posts (and doing all the various behind-the-scenes maintenance) that I wasn't getting time for the fiction projects I want to be doing including a VERY overdue book a lot of people were very generous about Kickstarting.

There was no "Coming to Jesus Moment" but over the last two months, I have realized the center wasn't going to hold. To criminally mix metaphors, I'm pedaling a flying machine that is overloaded and I'm pedalling faster and faster and faster but still losing altitude. The problem isn't how fast I'm pedaling. The problem is I need to jettison some baggage. So I checked in with my 200+ bosses, and now I'm going to be majorly altering the structure of this blog.

You can see the latest poll results in that screen cap above, of course, but this wasn't my first poll on the topic (I've sort of been asking the same question in different ways for several months) and I've gotten a lot of good feedback from Patrons and friends over the last few months.

I'm going to modify the Patreon goal tiers and change the update schedule officially for Wednesday's post, but we're going to go to a M-W-F update schedule with only occasional T-Th-Sat light and fluffy, jazz hand shenanigans. You can expect our hard hitting post to land FRIDAYS. I'll still be writing, but I'm absolutely going to be clearing out more time for me, and I'm going to be prioritizing other writing projects.

Email ThisBlogThis!Share to TwitterShare to FacebookShare to Pinterest
Labels: A Writer's Life, Blogging About Blogging, Meta