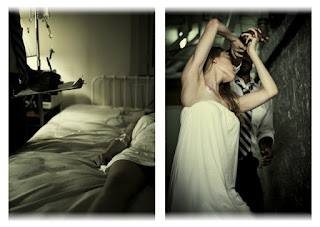 I tell people… I’m never going to write a novel.

I used to try, and I’m certainly capable of writing books. Some of the designs I’ve created are novella-length in terms of word count. I even wrote a book as a prop once. But when I try to tell a story, I can’t do it that way. I need help: I need people to move around, act it out. I need them walking and talking doing things. That’s how I see stories. They’re told through action and through time and space. I have a problem translating that, artistically, to a page.

I’ve done traditional drama in various locations and various forms. I love it; theater is passion. But I’ve never supported myself in the theater. It’s never been my day job. Instead, I learned to tell stories in cooperative groups, improvising all sorts of fantastic plots about vampires, zombies, heroes and villains. I grew up doing this. For twenty years, I’ve been telling stories by convincing friends to play pretend with me. So I’ll never write a play, because it’s so much easier for me get a bunch of people together and tell the story cooperatively.

And, after twenty years, I think I’m actually decent at it. But am I a writer?

My name is Ryan, and I “write” larps… live-action role playing games. I used scare quotes because really, I design larps. I could put in 100 hours of work, and the written part is less than five pages long. I could bang out 100 pages of prose and consider it a minor task. However, the activity definitely resembles writing: I’m putting words on a page, and telling a story.

There’s a phenomenon, which happens everywhere but is often associated with Australia, called culture cringe. It goes back to the 19th Century, when to be taken seriously, an Australian writer had to be read in Britain. Even then, the Australian writer would be labeled in reference to an English or American writer (i.e. “the Australian Kipling.”) The feeling of inferiority became internalized, and Australians came to cringe at things that were identifiably “Australian” (ergo the term, “culture cringe.”)

In geek culture, I think we’ve taken it a step farther sometimes.  We don’t internalize inferiority, we internalize defensiveness. We assume others will think less of our writing if it’s in a comic book, despite the fact that comic book franchises are the biggest thing in entertainment. I hesitate to call myself a writer, not because I think what I make is necessarily less artistic, but because I think other people would. I hesitate to use the word “larp” in general because I fear it conjures certain images in people’s heads.

For example, I’m working on a high-concept larp that combines dance and immersive theatre here in New York. It’s intended as an artistic piece, and going up in a theatrical venue with a cast of nine professional actors and dancers. It’s an expensive project, and we’ve worked with a number of people on the marketing. And the marketers were divided on one point: do we call it a larp?

There was a clear divide between marketers who had been to a larp, and those who hadn’t. Without exception, all the larpers came down one side, and the non-larpers on the other. The interesting thing? It was the non-larpers who said we should call it a larp. “It sounds cool, new, different,” said one of them. “It could start a trend.” It was the larpers that were adamantly against it.

I’ve talked to hundreds of people, in person, about the project, and there’s still a moment of hesitation before I call it a larp. I’ve never seen any sort of negative reaction when I do. So where does the hesitation come from? It’s not really culture cringe or imposter syndrome: I believe in what we’re doing: it’s artistic and new and exciting, and it’s definitely art. It’s more an expectation about the person in front of me. There’s lots of legitimate reasons to be careful around other people, particularly with the current political climate. But as “geek” becomes cool, what does it mean when we start conversations expecting derision, and none comes our way?

We’ve settled into using the term “live-action roleplay” in our marketing, mostly because the word “larp” is a little weird in and of itself. And I’ve started to call myself a writer, even though I’m not sure I’ve internalized that one. And I’ve started looking around at little fragments of writing: well-crafted photo captions, the backside of toy packaging, greeting cards. Hell, my daughter writes fanfic (she’s 12 and has absolutely no hesitation to share that with her friends). I realize that there’s the ability to be artistic in almost any medium, and I have every right to call myself a writer.

Or a larpwright. Because I think that sounds cool, too.

Ryan is, officially, a larpwright. He lives in New York City with his cat, Roxie, who is a one-and-a-half year old tortoise-shell who responds to her own name. His human family members all respond to their own names, too. You can find out more about his upcoming larp, The Mortality Machine, here.

If you would like to guest blog for Writing About Writing we would love to have an excuse to take a day off a wonderful diaspora of voices. Take a look at our guest post guidelines, and drop me a line at chris.brecheen@gmail.com.
at October 05, 2018