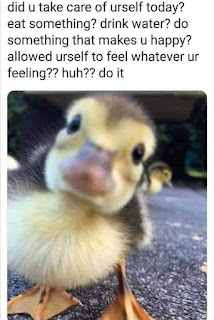 Here is a collection of the best memes and statuses from my public Facebook page over the period of Nov.-1st through 15th. (You're welcome to follow me there.) As the election results became more and more certain, I started to regain long-term focus and drop my thoughts on Facebook a little less.
Due to the holidays and how far behind I still am on the compilation posts themselves, you'll see TWO this week, but starting with the December compilation, I'll only do them once a month instead of every two weeks.

I don’t love the pandemic, of course, and I’m no fan of maskholes (especially when they pull it down past over their nose like a Covid shirtcocker). But at least there’s a way to tell from like 30 feet away if someone is an inconsiderate jerkwad.

You used to have to wait until they started talking.

Joe Biden is many suboptimal things, but he isn’t likely to endanger the life of Christians, encourage stochastic terrorism against white people, ban Christian-majority nations from traveling here,  or treat cities and states run by Republicans like they’re a geopolitical enemy (though Russia is not). 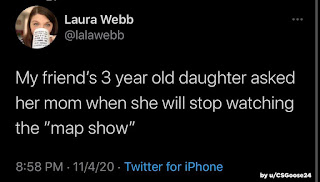 In case you didn't know. I am going to be awarded the Nobel prize for literature. I will be suing to stop any nominations or votes that are not for me and saying the word "fraud" a lot. I basically already won. 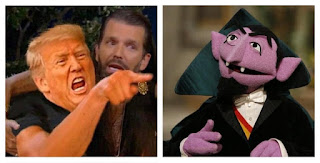 1- That if tomorrow feminists changed their name to "humanists" or "egalitarians," suddenly ALL those people who "hate that word" would jump on board, give a shit, and fight the good fight against places where there is gender inequality. They would instantly care about street harassment, pay inequality, family planning, and sexual assault because before, that word ("feminism") was simply SO off-putting that that they couldn't bear to stand up regarding issues that disproportionately affect women as long as it came under such a sexist label.

2- That, as has happened every single time a marginalized group demands rights throughout the arc of human history (ever, like literally EVER), the people who stand to lose power find ostensibly reasonable-sounding ways to rationalize the fact that they have absolutely no intention of challenging the status quo, but would prefer a justification that sounds plausible to simply saying “I don’t really care.” 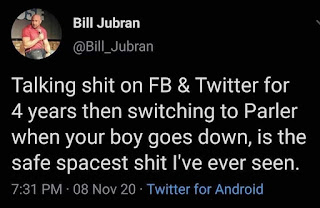 Republicans are so shameless about this, they will straight up say the quiet part out loud: that re-enfranchisement efforts will cause them to lose.

Essentially by a few points here and there, they've been cheating. They've been cheating more and more every election for decades. The last election, they basically welcomed election interference from a geopolitical enemy because it "Eh....it was on THEIR side." They can't win without it.

And while I'm sure some of them are not capable of imagining how they could lose unless Dems cheated even MORE, this is actually a much simpler equation. This is basically the imposter listing out everything suspicious that every other character has done to throw everyone off their own scent.

Now the GOP is cheating SO much, it's become essential to their ability to even hold the line. They have to keep the focus anywhere but on their own voter suppression (which, sadly, they are actually doing quite effectively). Even if some really do capital-B "believe" their own shit (but especially for those that don't), it's a survival mechanism to keep the focus on everyone....ANYONE else.

[The night the results were actually declared.]

I see a lot of people (including me) making disclaimers of their joy that Trump's regime has been stopped. I get why they're doing it (I did it too), but it's sort of a shame that we have to.

We all kind of get that Biden and Harris are flawed and how the work has only just begun and stuff that literally every single person I can think of knows. (Like, honestly, is there ANYONE in my extended circle actually saying, "Oh good. I can relax for the next four years. Phew."?) And that this is more like celebrating the stanching of a wound when the person is still dying and needs to get to the hospital. Fascism lives on in lower-key forms, and 70 million Americans watched four years of what they could expect (the lies, the racism, the xenophobia, the anti-statesmanship), and didn't think it was a deal breaker, so we have a hearts-and-minds ground game that will take decades to start moving the needle.

But the kind thing to do for ourselves and each other would be to know that we know that for four years, we've been living a nightmare that actually WAS a pretty fucking extra, and self-care would be taking a moment/letting folks take a moment before winding up about the miles to go or the very next thing.

Hope is not a luxury. Joy is not an indulgence. Celebrating a hell of a baby step doesn't mean we've lost sight of the objectives. That contrarian streak that stands against ever celebrating mainstream victories––that is so chic on the left––is a bit on the toxic side.

We all want to blow up the Death Star, but some days we have to settle for successfully evacuating Hoth. 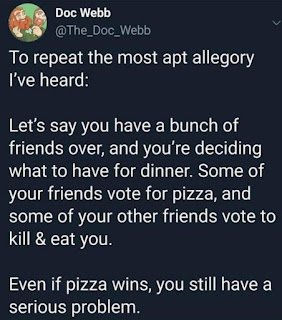 Juxtapose this election, and its high voter turnout yet STILL narrow results with the far-left belief that socialism basically sells itself and "Bernie would totally have won" (and be sure and factor in places like Florida where there was a RED wave primarily due to the Trump campaign saying "socialism" a lot), and please consider the possibility that actually NONE of our goals is even remotely realistic in a pluralistic nation that leans right, unless there is a hearts and minds ground game the likes of which no dank meme (or calling anyone who disagrees a "bootlicker") is ever going to replace. Also a re-enfranchisement effort that goes on in mainstream politics more than once every four years. And that sort of institutional change will require mainstream civic engagement and legislation....or in common parlance: "selling out".

Or, of course, we can win a war against the greatest military of all time as well as the civilian militias that will resist us––all on their home soil––and institute our policies on threat of violence against the will of the vast majority of society over which we will have to minority rule in an anti-democratic fashion. I suppose that's almost as realistic as socialism taking over a country in which leftists don't participate because of the dirt it will put under their fingernails. 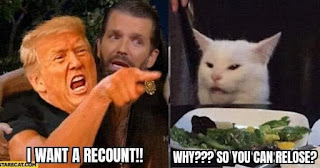 And Mitch McConnell will still be in office but won't be the majority leader. So he can't effectively be the most powerful human in US politics by simply not allowing ANY legislation he doesn't like to come to the floor for a vote. And Dems can get through some more progressive, Senate-approved appointments. And there will be real stimulus. And maybe Dems can take the country's temperature on a little minor court-packing action. And McConnell just has to sit there and watch it all.

And the left realizes that it CAN have power and starts involving itself (demanding democratic reforms as its "price" for mobilization) and moving the slider away from predatory capitalism and billionaire feudalism. And there are sex parties to celebrate with no creepy guys and at least a couple of people who say "I **REALLY** would like you there, Chris." And a unicorn befriends me and lightsabers are real and.... 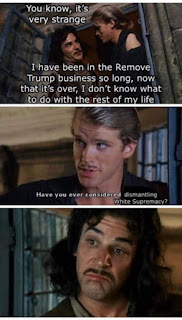 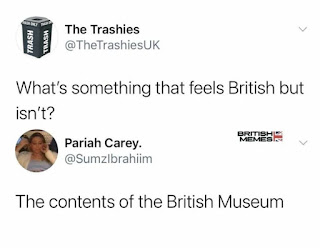 I would caution my fellow white peeps to choose their words with care in the coming days. Being disgusted, revolted, and appalled, by the fact that so many people saw his naked racism on display and in policy and voted for him anyway is quite different than being SURPRISED by that.

We certainly got bamboozled by some promising polling data that maybe the water's edge was not where we thought it was and it is a pleasant fiction to imagine that Trump finally went a bridge too far with his open white supremacy, but BIPOC have been telling us the national situation was REALLY THAT BAD for decades. But this whole narrative of total "shock" or being "flabbergasted" requires not having listened to them again and again and again about their lived experiences in our society. 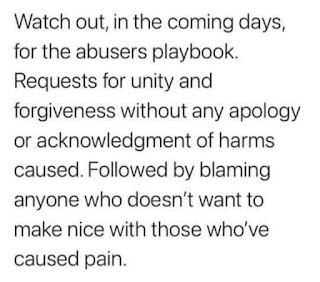 A- There's never been a single silent thing about you.