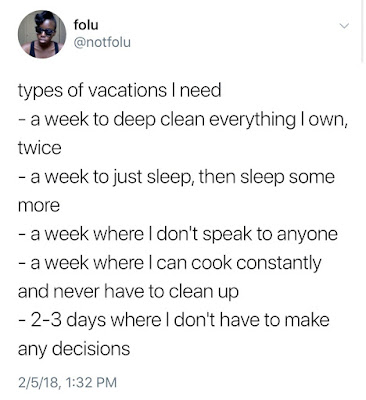 It's been an unbelievably hellish three weeks, but I wanted to get SOMETHING posted, and I'm very behind on these compilations (as you can see from the fact that we're still working on October).

Here is a collection of the best memes and statuses from my public Facebook page over the period of Oct-1st through Oct-15th. Also, as a small reminder to everyone, I was doing a lot of writing on my public Facebook profile in the months before the election. (You're welcome to follow me there.) Since the election––or more accurately since the results became increasingly obvious––I have been able to focus again, and though I absolutely AM getting back on track, it's a lot of slow going and two steps forward and one back because of the holidays. I'm going to blow through these compilation posts over the next handful of weeks (both to catch up and to give me something a little lower key to throw up while I'm busy AF).

After that, maybe I'll do more like one a month instead of every two weeks.

Note: Some of these are very topical, so I've put notes about what was going on when they were written. 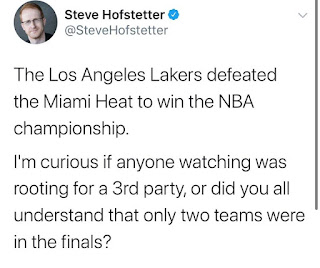 [Upon hearing the news of Trump having Covid-19]

Trump hasn’t been Machiavellian this entire administration. Or admitted weakness even when every poll said it would bump his numbers (like wearing a mask). I’ve certainly never seen so much as an ounce of humility. He also thinks he WON his first debate and doesn’t read enough or suffer non-sycophants enough around him to be informed otherwise, so he’s probably not trying to get out of them.

A lot of the “so I can CLEARLY not choose the wine in front of ME!” stuff going on on my timeline would possibly be effective (if not exposed just as quickly by the leakiest WH ever), but is wildly out of character. My guess is this one is real.

On the other hand, a flurry of “Is this true?”/“Could this be a trick?”/“What is the WORST possible way this development could go wrong and hurt me?”/“What is acceptable to feel?” is EXACTLY what you would expect from an abuse victim trying to process reality, so I’m not exactly surprised at how spun around everyone is. 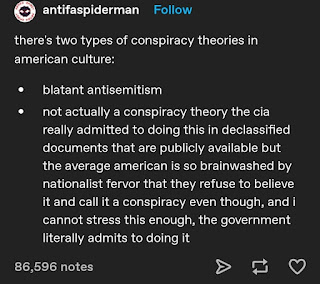 [As Trump got admitted to the hospital and his inner circle started reporting being infected.] 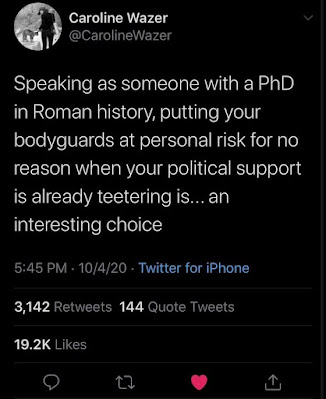 I have to admit that––if I were coming up with things that would really work against Trump's reelection––bringing the focus directly back to Covid-19 (his response to which has brought him the lowest approval of anything he's done) in a dramatic and sensational Masque of the Red Death way that could not be poo-poo'ed as "just the flu," and that takes a dozen or so high-profile Republicans off the board ONE month before the national election would be, like, pretty much exactly what I'd come up with.

I may have had complicated feelings (and to be clear I blame no one with....LESS complicated feelings) about my own initial reaction to the news, but without invoking weird stories of Russian roulette or something, it's hard to think of a group who more thoroughly brought something on themselves.

They killed thousands with misinformation and a casual disregard for the most vulnerable. They FLAUNTED an indifference to science. They milked the movements that spurned even mild, reasonable precautions because it won them cheap political points. They even ignored it when they thought it was only really going to hit Democrat strongholds. By the end they were absolutely conducting business as usual and "It is what it is." They not only didn't act like leaders, they behaved antithetical to leadership. In this, as in everything, cruelty was the point.

Sow the wind, reap the whirlwind. 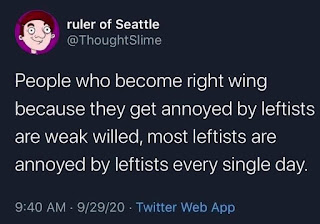 There are a lot of emblematic moments in this presidency (the Bible photo shoot is probably never going to be knocked out of first place), but breaking isolation in clear disregard of medical protocols and endangering all those people in your entourage who have no choice but to join you just so you can get a photoshoot showing how recovered you are has got to rank up there.

Because blatantly doing the opposite of medical guidelines to bolster your political ambitions didn't, like, CAUSE all of this or anything. 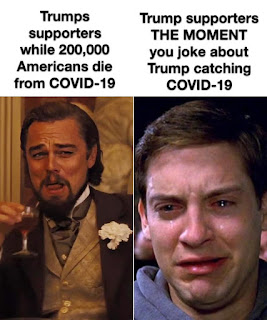 After receiving what you will never convince me wasn't a life-saving intervention due to medical care that literally only a few people have access to, and most could not afford if they did, and after being returned to his "home" that can operate as a functioning hospital (and probably while flying on steroids), the President tweets, "Don't be afraid of Covid."

He almost dies, probably WOULD have if not for what is likely a high six/low seven figures level of care from an army of doctors with no other charge than him, and his response is to tell everyone else to disregard their health and safety because he was totally right all along.

I guess I was wrong that nothing could top out that Bible photo shoot as emblematic of what a horrible leader and human he is. 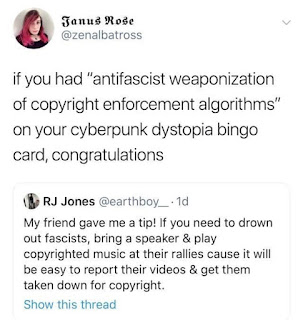 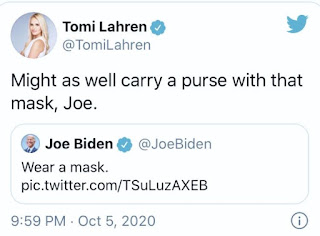 If I had to write an academic paper on the unspoken toxic assumptions of the right wing, I think one of my examples could be just this tweet.

There's so much to unpack here. Even Oct. 5th, with Republicans falling ill left and right and a ghost-town West Wing only one MONTH from an election and a disaster of leadership that is probably going to cost the GOP for the next decade, the simple advice to wear a mask is not only rejected but still viciously mocked.

Perhaps most telling is that this elevated-to-mouthpiece woman of conservative values has apparently decided that the worst thing she can call Joe Biden is....feminine. That's the cuttingest of insults in her world––some deeply internalized misogyny. 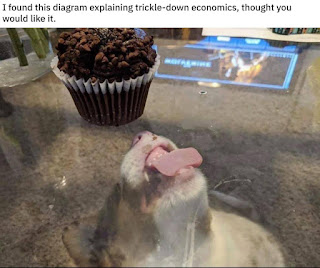 Listen...maybe you don't know this, so I'm going to tell you off the QT and *on* the downlow, but if you sat there and loved my posts for months, and then told me I didn't know how to write on the day I posted a coming-out story....

....you're not as slick as you think you are about what your problem actually is. 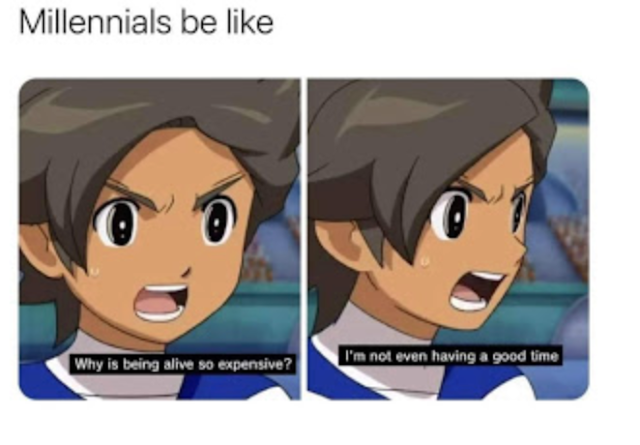 [Note from Dec 11th- Well, this was prescient.]

...until they stand to lose.

Then they will undermine them. Then they start to be okay with other things as long as they are the ones who WIN. That whole graceful "Well, looks like we lost this time" thing you see is almost exclusively the purview of people who value the democracy and the free trade THEMSELVES (and also only on television). For everyone else, mandates are great until they become obstacles. 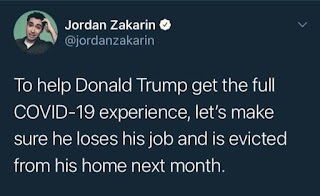 So moderates (and no small number of liberals) who continue to be shocked and kind of gobsmacked at the open and naked lengths to which so many conservative actors are going in order to steal an election (often with little more than a shrug and "Who's gonna stop us? YOU?") should try applying the the Occam's razor principle.

Instead of a patchwork of strange one-off zealots and this growing body of results skewing efforts like gerrymandering and voter suppression, they would notice a much more elegant explanation––the party that is about to lose and lose BIG (the party that, in fact, can't win) considers it a moral imperative to cheat.

And suddenly everything they're doing (and all that is yet to come) isn't the least bit shocking.

That they cannot be shamed is not the least bit surprising (they are absolutely pursuing their values––free and fair elections ain't one of them). That they disenfranchise their opposition despite a zillion proofs that the fraud they're using to rationalize it isn't a thing becomes obviously not actually about fraud, but about disenfranchising their opposition....and saying anything to justify it while they continue to do so. That they absolutely want fewer people to vote instead of more suddenly is perfectly understandable. That they will do this in the open even makes sense because they see this as a battle that they must win.

It even has predictive power. If you assume that they value winning over democracy, you can guess their next moves quite easily. They will attempt to subvert the results of the election by any means necessary. They are NOT interested in participating in our liberal democracy (at least not in good faith), and if we don't explain to them (and soon) how out of bounds they are, they will simply grab the power and establish minority rule instead of governing a pluralistic society.....all the while insisting that it was totally fair because (without a shred of actual evidence, mind you): "it was really the Democrats who were cheating." 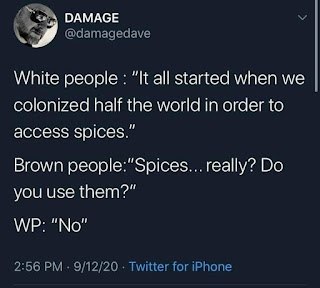 The right knows it can shame the left because generally the left is still capable of feeling shame. The left still has values it feels conflicted about when they are at odds with each other, cares about integrity, calls out its bad actors, gives a shit about impact....

Four years of telling us to fuck our feelings, calling for our deaths, and running policy pretty much based on what "triggers" us (or never really calling out the contingent of their party that DOES), and governing in a way that shows us they've absolutely no interest in a pluralistic democracy will change how much of that shame we're absolutely willing to push down and move past, though.

So the right has reached the "find out" portion of their fucking around. 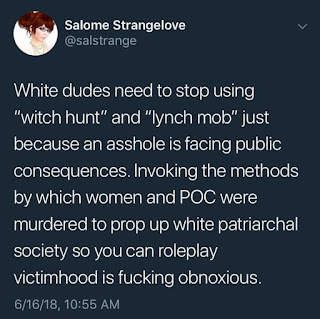