Burnout and the Writer 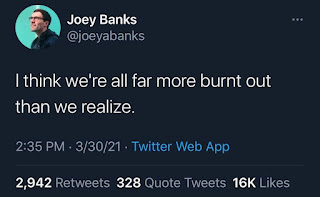 I want to talk about burnout.

There's a story called All Summer in a Day where a girl who was raised on Earth, but now lives on Venus, remembers the sun and hates the weather on Venus. But then Venus gets one break in the clouds (that only happens every gillion years, or something) and all the kids raised on Venus will get to experience a few minutes of Earth weather. I won't ruin it for you (and obviously it's not like overflowing with scientific accuracy), but the reason I'm thinking of it is because it's kind of what the pandemic felt like.

For like this one minute, those of us who knew what the world used to be like (instead of a flaming ball of shit) saw the clouds break and the sun start to come out. The vaccines started rolling out. Folks who had been extra careful started to peek their heads out. We started a collective sigh of relief of the breath we'd been holding for fifteen months. And even though anti-vaxxers were doing their best to ensure we never reach a viable herd immunity, we were starting to make progress towards life getting back to something that at least resembled normal. But then the moment of sunshine ended. The clouds came back in. And now here we are as delta variant closes in….aaaaaaalmost back to square one. Groups are dangerous all over again because of breakthroughs. Anyone with kids is almost back to a full quarantine. Risk assessment involves a bunch of stuff we just don't know.

It's crummy normal Venus weather all up in this bullshit. But we got to SEE the sun for fifteen minutes, so this one burns like only returning to pain after a little bit of relief truly can.

I think it's got everyone burned out. Not just burned out in a way we might have been if the vaccine had taken four years to complete, which would be bad enough, but in a way that you can only be burned out if you get a tiny moment to feel like maybe it's going to end, almost get to touch it, and get the rug yanked out from under you.

We are utterly, completely, beyond-the-telling-of-it burned the fuck out. On a fundamental level. On an existential level. Down to the marrow in our bones. 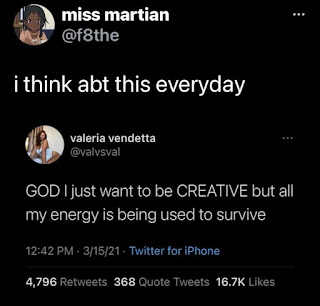 This pandemic is so destructive to creatives. And I think the most important thing any of us can do (writers or not) is be kind and gentle with ourselves about understanding what damage is being done.
I spoke with a musician a little while ago who told me that when the pandemic hit, he thought he was going to have all this time to work on his music and it was going to be great, but after only a couple of weeks, he started to lose focus completely because it turned out that he was missing out on all the LIFE that inspired his music. Looking at the same four walls day after day started to grind down the way his creative brain even worked. Interacting with new people and places and things was what fired his creativity.

I had a different problem. My nanny work exploded and left so little for my writing and creative life that it was a struggle every day to find enough time to get an article written.
Still another friend simply dried up. The anxiety and depression were overwhelming and trying to be creative simply…didn't work. There wasn't anything their creative brain had to give them.

I know several people who had these amazing ideas for all the work they were going to do, and they don't really know the reason, but they just….can't. They just sit there and it doesn't happen. Day after day after day.

The stories of writing whole novels or taking on entire new creative endeavors while sequestered away happen, but it's important that creatives understand that they are not broken or lacking dedication if the pandemic has taken its toll and burnout has claimed their ability to be as prolific as they once were. The folks who can pull this have lightning in a bottle. They don't have more discipline or some greater desire—if that were true all artists would be exploding with productivity, and I assure you that we're not. For some reason, at this point in their creative life a pandemic happens to be good for them is all. For most of us, we're putting so much effort into just getting by that there isn't a lot left to just go be prolifically creative.
For the working writer (or creative)—or one who is determined to "make it"—there may be little choice but to try to churn something out. We don't get the same kind of vacations or breaks as professionals, and even though we can give ourselves time off any time we want, our income might immediately suffer. So maybe we have to sort of embrace a "reduced" output period where we really give ourselves some forgiveness and latitude and keep working, but we also do a lot of self care to recover, take as many days off as we can get away with, and try to keep in mind that creativity doesn't really work (certainly not nearly as well) when one is in "survival mode." But it's just important to remember we're not going to bounce back like nothing was ever wrong. The same way many of us are kind of dragging our asses to our jobs and going through the motions.
But whether you HAVE to produce some copy if you want to eat that month or whether you just do it for fun and find that right now it isn't, it's important that everyone understand just how deeply and profoundly we are burnt out.

We are. Almost all of us.
So. Burnt. Out.
Now…I didn't stop being me last night. I still think that if you want to "make it" (for whatever value that means to you), writing daily is important to cultivate discipline. That way when the sun comes back out, you have good habits and aren't completely out of practice. But be gentle with yourself. Accept some crap days. Understand that you're not going to be at your best, and forgive yourself like you would literally anyone else.
Sometimes it's enough to simply survive.
So whether you're a casual hobbyist, a dedicated part-timer, or a working writer, it is important to acknowledge what is happening—and it IS happening—and to be as kind to yourself as possible. It'll all still be there when we get through this.
And I don't really have a pithy, wrap-it-up-in-a-bow way to talk about burnout where I can bring it all back to a poignant message in the last paragraph. There just isn't one. Burnout is real, and almost everyone is feeling it. Acknowledge it. Sit with it. Set goals and objectives that account for it and that don't pretend it will just go away or shouldn't be there in the first place because a "real" writer would grit their teeth and work through it. Give it what it needs as much as you possibly can, and know that you aren't going to be (you CAN'T be) some supercharged dynamo of productive energy if you are burnt out.
at August 13, 2021