It'll All Be Better With the Cardboard Drawers 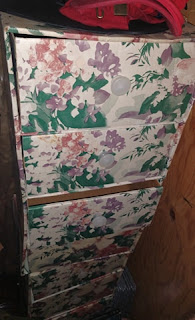 A million, zillion years ago I was married, and my spouse and I did not have an easy time keeping our space clean, and, if you listened to them, the reason why was apparently because we didn't own a set of cardboard drawers.

Yes, you read that right. Stick with me, and I'll make it make sense. And I'll even tie it back to writing.

First of all, I have to take a beat and recognize that there were a LOT of reasons we didn't keep our space clean. We were young. We didn't prioritize nesting. We would rather play Final Fantasy 7 and try to beat Emerald Weapon. We both had executive dysfunction around domestic chores, and while I don't think it's cool to do armchair diagnosis, if they told me tomorrow they also had ADHD, let's just say I wouldn't drop my drink dramatically to the floor where the camera would watch it shatter in slow motion. The place was also tiny and could go from pristine to post-apocalyptic movie set contender in only a single wadded up ball of dirty clothes that didn't find the hamper. 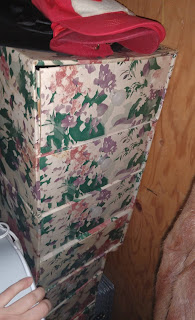 I was the housespouse (I usually am in cohabitation arrangements), and so I would do 90% of the cleaning, but I bristled at messes that were clutter simply not put away or things abandoned when they were done being used. I didn't mind the domestic chores, but just cleaning up after someone who is kind of sloven has a totally different vibe.
Every time I would bring this up, the answer was the same. "I need cardboard drawers." Now…if you're thinking…"wait a damn second—what do cardboard drawers have to do with putting clothes in a hamper or putting things away instead of just leaving them out?", believe me when I tell you that I am RIGHT THERE WITH YOU. Other than sort of vaguely both being about places to put things, there was no real connective tissue. But they swore with their hand to God that this was the ONE thing that was going to make all the difference.

"It's the cardboard drawers. It'll give me a place to put things. It'll all be better when we get them."

"But that doesn't—" I would sputter. "Those two things don't even have anything to do with each other. Only in the fact that one is LOOSELY related to organization are they even remotely—"

"IT'LL ALL BE BETTER WHEN WE GET CARDBOARD DRAWERS!!!"
I see a lot of writers do this. They fixate on something like their new desk or their ergonomic keyboard, their new writing program that organizes their chapters for them, and while these things are nice, they don't MAKE you write. Their absence doesn't actually prevent most people from writing. And once you have them, doing the work might be easier, but it's not going to do itself. You still have to sit down in your super ergonomic mega-comfy chair and write for a few hours a day if you want to pump out a novel in a year.

Yes, you might be super mega comfortable doing it, but it's still a lot of work, and it's probably not really what's holding you back from just firing off the great American novel.
The affectation can be almost anything. It can be physical like a chair or a desk or a room that can be made into an office. Or it can be more cerebral like "next week when things get easier." Or "once I take time off from work." But the fact is that in almost every situation where we're sitting around and just waiting for something to improve before we can start work in earnest, if we weren't writing before the thing, we won't be writing after the thing either.
Now, it's not that none of these things matter. Some of them may even help you write better or longer. I certainly write more when I have a room and a desk to write at rather than with my back leaning against a wall with a laptop pillow while children play Enter the Dragon two feet from me. If you've been here for more than, like, an hour, you know I am constantly complaining about a better schedule that is just a week away from kicking in. But in the meantime, I'm still writing.

These things like chairs and offices and schedules are not REALLY writing, and it is the people who sit down even when they don't have a perfect schedule, a perfect chair, or a perfect writing program and DO THE WORK who end up doing better when they have one or more of those things. I talk about these things and work on improving them, but in the meantime, I write.

Unswervingly—and I mean maybe there are some exceptions in the history of the world, but we're talking really close to 100%—everyone who sits around and waits for some factor to be improved before they can even start ends up finding a new reason they can't do the work once they get what they were waiting for. The office needs a new desk. The ergonomic keyboard works, but now a desk that can go up and down is needed so that writing can be done standing up. The week off had to be used doing all the home improvement that had been procrastinated, so we need ANOTHER week off.

In an M. Night Shyamalanian mid-career plot twist (that is to say, entirely predictable by anyone with a pulse), getting cardboard drawers did not solve the problem. A few things were put away. We had a slightly better system of organization. It was easier to clean up when we cleaned up. BUT…the piles of dirty clothes did not move themselves to the laundry and the messes I cleaned up after were still there. Because the problem was never the absence of cardboard drawers. Fixating on them, and fixating on the problem as somehow insurmountable without them, just meant we kicked the can down the road for dealing with the actual problem—the clothes needed to be put in the hamper.

The same thing happens with writing. The longer there is one more thing without which writing is "simply impossible," then the real issue—that it's time to apply ass to chair and do some writing and all the ergonomic furniture in the world won't make your work write itself—is not being addressed.

And you at least start THAT…without the cardboard drawers.

Email ThisBlogThis!Share to TwitterShare to FacebookShare to Pinterest
Labels: Metaphors About Writing