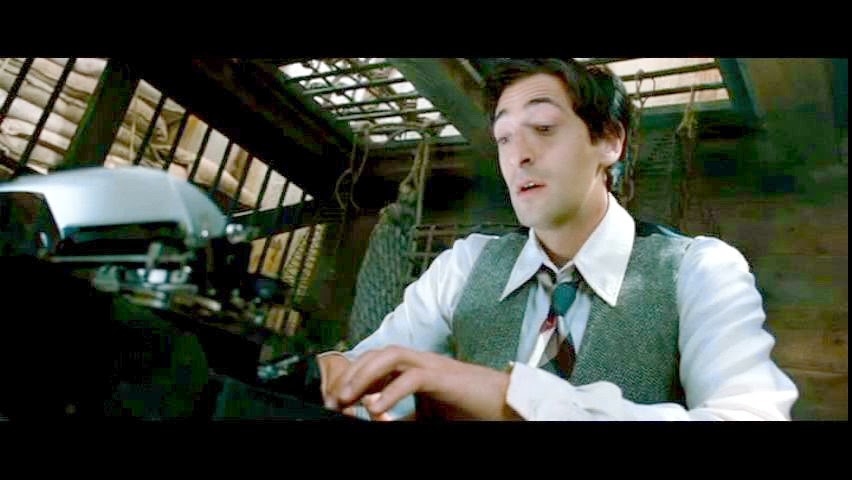 [Mike Fatum, my editor over at Ace of Geeks joins Writing About Writing's growing (yet still totes elite) cadre of guest bloggers with a question about writing–especially for stage and screen–from his perspective as an actor, director, and writer of performance arts. ]

“What if we refuse to leave.” The voice is impatient, now. It’s the second time we’ve run this scene, we’re all standing in the oppressively hot wooden dance studio, staring at ourselves in a mirror that refuses to hide anything about the fact that my gut is spilling over my belt, and she wants to hear it again because of one word?

I sigh, step back two steps, step forward again, and say, “And what if we refuse to leave?” She’s happy. We move on.

Our director is a wonderful lady, but she has a deep, abiding respect for the words as they were written on the page. Maybe too deep. This could come from the fear of a surprise inspection that rights-holders often spring upon community theaters, but I think it’s more than that. She sits us down one day, after rehearsal, and explains that the author has carefully chosen each word as it sits upon the page. To change even one thing, to paraphrase even a little, is to insult the author’s integrity.

At first, I think she’s utterly full of crap. I come from a different world, the world of film. I open every rehearsal for one of my movies by reminding the actors that if a word I’ve written, or a phrase or a whole paragraph, doesn’t feel natural to them, to throw it out and say what works. As long as the general emotion, the idea gets across as I intended it, I only care that what they’re saying sounds natural. I’ve never once chosen to use “morose” instead of “sad” for Artistic Reasons - it just sounded right at the time.

But then, this week, I happened upon this incident.

The basic summary is that a theater in Texas put on a musical that had yet to hit Broadway, and took it upon themselves to change everything about it. They moved the opening to the Act 1 finale. They changed whole pieces of dialogue. And the director had the audacity to walk up to the playwright and say, “Don’t you think it works better this way?”

When I read that article, I was furious. But as I thought about it - isn’t that what I do, as a director? Once I sit down in the editing bay of a film, I can chop it to pieces. I’ve pieced together scenes to chance whole sentences. I’ve moved beats from the beginning of a film to the end. And I’ve done so in the name of improving the piece. So why is it so taboo in theater? Why are the rights of the writer so much more respected there?

Playwrights will often sit in on every rehearsal of their newest works, assisting the director and the creative team. Screenwriters are lucky if they get an invite to the set for a day. What they do isn’t so different, but the results are. A playwright gets their work shown exactly as they intended. Meanwhile, Joss Whedon only has one line of his original X-men script arrive untouched. (And it’s the one about a toad being struck by lightning.)

It’s an interesting experience being both a writer and a director. I’ve never had to approach either a play or a film with an outside writer before. The changes I’ve been so nonchalant about in my own work, I now realize, might be really painful when I’m changing someone else’s. So how do we reconcile that?

Do you respect the work of the author, or your own feelings about the final product?

The true answer is somewhere in the middle. As a writer, unfortunately, we have to understand that what we write might sound absolutely beautiful in our own heads might sound terrible and awkward coming out of the mouth of a living human being. I’m sure Lucas thought having Anakin wax philosophical about sand was a beautiful thing, but those of us that had to actually hear it know differently. As writers for stage and screen, we’ve got to know that sometimes the director will need to change something, just to deliver a watchable final product.

On the other hand, directors have the responsibility to carry a writer’s ideas out to an audience. Maybe changing a line or two is ok. Maybe even moving a scene around is acceptable. But once you find yourself moving away from the actual, final thesis of the piece, you need to check yourself before, if I may be so bold, you wreck yourself. If you take a story that is fundamentally about hope and make it about hopelessness, you’ve failed in your responsibility to the original writer.

Of course, there are always tales of finding the story in the final product, and editors for film do this all the time. But we can’t lose track of the fact that there was an original brain behind it all, and we wouldn’t be making this play or film without them. To completely disregard their vision in favor of ours is a disservice.

What do you all think - do directors have to respect the writers who created these works? And how does this apply to adaptations of novels and comics?


[Mike Fatum is the Editor in Chief and Podcast Co-host for The Ace of Geeks (link to main website). He has been a writer and director for stage and screen for the past fifteen years. You can see some of his work here.]