We Now Return You to Your Regularly Scheduled Jazz Hands

Those of you paying attention may have noticed that there wasn't an entry yesterday.  That is because there is still one human being on this Earth who I can't say no to, even when it comes to my writing, and carving out time to do it away from distractions.

She just has this power. If she tells me to put something away or stop doing something I have to listen. I can't not. So this weekend when I was trying to get a little bit of blog work done and keep posting a little something, she kept telling me to knock it off. "Oh come be social, son!" she would say. "You have an actual problem, kiddo," she would insist. "You're obsessed about this blog thing," she said.

Each time, I would dutifully put my computer away and be a good son.

I'm pretty sure Shakespeare's mom told him to put down all those loose sheaf papers and come be social. "You're just obsessed with that quill!" she said to him. "This drama thing is an actual problem, Billy."

"Okay Mom," William would sigh, tucking away this new thing he'd been working on (a tragedy about a vengeful son loosely based on The Lion King).

The Globe would just have to do reruns that day.

Her power over me–which to be fair is really a reflection of how awesome I am as a son–is so significant it is immune to my usual reaction to irony.  She can literally tell me I'm obsessed with my computer and "that blog stuff" right before she goes and spends forty minutes on Farmville 2 (including calling me over to MAKE ME WATCH HER DONKEY RACE!) Then she told me about how her melon won the county fair. I can't actually make this shit up.

But she's got such mental control I'm such an awesome son, that I let this slide too.

But ever since The Contrarian came along, I have a new found respect for her. One time when I was a teenager and I was giving her just horrible attitude about something she dropped her voice into a low whisper and said, "I wiped your ass!" For the life of me I couldn't figure out what the holy hell that had to do with anything.

If anything, my mom's power awesomeness as a son has grown.

I may very well be the best son ever.

Possibly of all time.

As per Blog's instructions, we're still going to have an easy week for the next seven days while we're on "vacation".  We'll put something up every day, but it'll be a little lighter fare than normal. 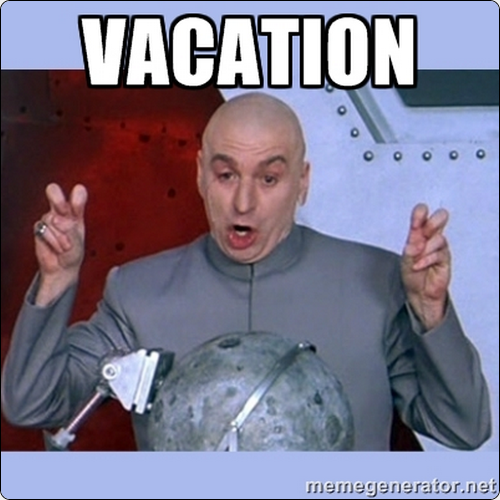