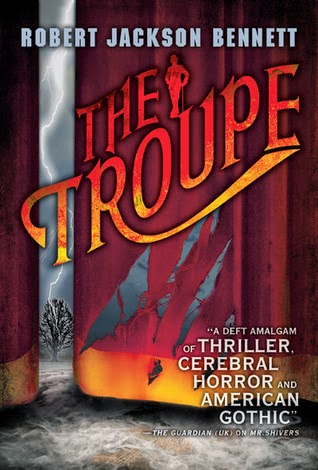 I forget to slow down when I'm talking to humans. As I was saying, the pay scales here at Writing About Writing cap out at "cripplingly destitute" and that's after you get about a dozen raises, so I've had to do some moonlighting. And being a feminist book recomenderizer is a very niche market, especially among my fellow gnomes, let me tell you. However, now that Chris is getting his shit back together time-wise and scheduling guest bloggers again, I have a great book I want to tell you about today. It's called The Troupe and it's by Robert Jackson Bennett.

George Carole is an incredible piano player who has joined a vaudeville show to try and find his father, Heironomo Silenus. However, George quickly comes to realize that this troupe is unusual even for a vaudeville act, and that nothing is what it seems. In fact, it goes well beyond such a tired cliche, and most things look like what they are not. The other members of the troupe hide secrets that go far beyond trouble pasts. From the exotic acrobat to the ventriloquist who defies plausibility to Selenus himself, each conceals a piece of a horrible puzzle.

George begins to realize three things about the troupe almost immediately upon joining: one, is that they are looking for something, two is that everywhere the troupe goes, a little bit of magic seems to go with them. But perhaps the most troubling thing George realizes is that something else is looking for them.

Bennet style may strike many as far to filled with adverbs to be enjoyable, and his predilection for "light vs. dark" imagery and some nice guy tropes might cause a few cringes, but he weaves an unconventional tale that twists both of these starting positions into places one might not expect them to go. Just like everything else in this novel, they are not what they seem.

In the tradition of vaudeville, American gothic, and magical realism, but with a dash of just-plain-ol-fantasy thrown in to keep you on your toes, The Troupe takes you on George Carole's journey to discover what is really going on with this motely crew, through encounters with powerful beings, ancient supernatural powers, and stakes that turn out to be the highest imaginable.
at December 26, 2014