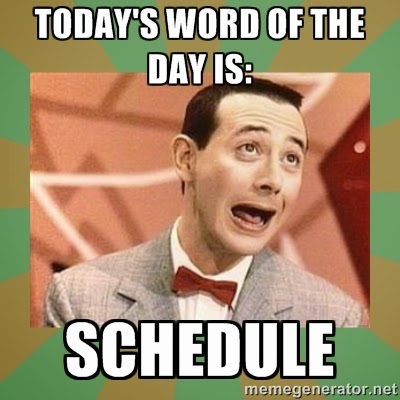 Just a quickie today as I dig into writing a long overdue Grounded Parents blog and start the also long overdue process of whipping up some thank you notes for the amazeballs donors who have literally kept me going over the last couple of weeks.


The word of the day is "schedule." Whenever you see the word "schedule," scream real loud*

First of all, the sun has come out...right on schedule. One of the reasons I don't use the word "depression" (or at least try not to intentionally) when I'm describing my mood swings is that the depression of those I know who have actually been diagnosed with clinical depression don't have a predictable two week half life. It can go on for months and feel permanent. While I've had bad situational depression that has lasted more than two weeks, it took my parents divorcing, the prospect of never ever kissing a girl, and being in my angsty early twenties to get me there. Just knowing that it's going to end is an advantage I have over people with chronic illness.

Speaking of schedule, it's Weasel Week and the weasel in question wants to go to Disneyland....for like the whole week. (I may or may not approve of this plan whole heartedly. I admit nothing.) I have a few entries half written, and we will have recovery days between park days in which I will, in addition to attempting to restore feeling in my poor feet, punch out some writing. However, you might see posts going up at weird times or "meaty" entry and "fluffy" entry days switching off. This probably just means I got up early and ran off to Radiator Springs to beat the crowd onto Cars...because that's what weasels do.

Also, speaking of being right on schedule (or technically ahead of).... I was reading an older "How to be a Writer" book from the eighties this week and I noticed that the claim was that on an average "career timeline" a dedicated writer could expect to build up a tiny audience and make a couple of hundred dollars a month selling short stories after about three to five years. (It said they might take as long as seven to ten years of dedicated writing to publish their first novel.) Anything else was technically possible, particularly if a writer had been working incognito for several years, but not really to be expected by someone who wasn't just idly fantasizing.

So take heart if you're slogging it out via non-traditional publishing. It is possible to be RIGHT. ON. SCHEDULE.  in terms of career development.


*Unless you live with cranky roommates who hate noise.