Personal Update on the Fly 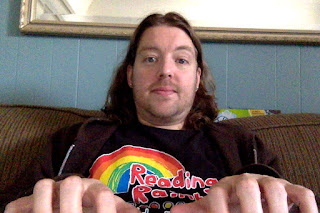 I got a sudden tag in this morning at the outset of my writing time or I would break down for you why this isn't quite as miserable as it looks. (It's pretty miserable, but I feel like it doesn't reflect my couple of decent sessions and remarkably good intentions.) Of course my brain was cooking beyond my ability to even focus on text for four days of the last week as I nursed 102 fever and tried desperately to keep down water, and I've been taking it easy for four more as symptoms have hung on and kept coming back like the monster in a slasher flick. I've been poking at the novel for over a week just to not lose my mental momentum, and that's basically about as much as I've been able to do until just this weekend when I had the decent session.

I'm also, to my shame, still getting back into a more measured, paced (and non-fiction) writing from the post inauguration mind-fuck. The cacophony in my brain (echoed, to my relief, in so many other artists I talked to and read about) kept me from being able to focus for very long at all and at first stifled my creativity.

Ironically the ability to calm those voices, focus my mind, and get to work has been helped this time by being sick. After a while of a terrible cough, you just keep coughing because your throat is irritated and there's a tickle. I was actually getting a back spasm from coughing so hard and so much. So I just...didn't cough. It took phenomenal concentration and focus, and at times threatened to trigger my gag reflex, the urge was so strong, but eventually the tickle would calm, and I would be able to go to sleep.

I will say this since I'm nothing if not a dispensary of fortune cookie wisdom. (No...really.) Recharging one's batteries is important. My writing time was becoming a long, unfocused dribble in front of the computer with COUNTLESS distractions by Facebook and other social media. Gutting out that next word and the next word was really tough. I noticed after I was sick that I was having all kinds of fun and enjoyable inspiration–talking about being sick from the virus's point of view, and all manner of playful status updates.

It's not that I would back off on my advice to write daily if at all possible, but if you're feeling stuck and writing sessions are dragging out, you might try a really real break. Go out for a few hours. Take 24 hours completely off. (I don't really recommend getting the flu, but apparently it'll do in a pinch.)

We've got some good stuff coming this week including an article about Logan and the next part of our tone article. We're also going to get our massive thank you post written to all the wonderful people who have helped get Triexta's Kickstarter going. Hopefully this emergency kid-watch is a one shot and not an all-week need.