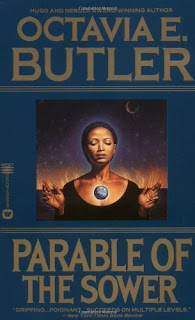 What is the best "something is very wrong here" Dystopia book (or series)?
Last chance to nominate or second a nomination that is there!
[Please remember that I am doing an easy week here on the blog that will be followed by some time off. (Hopefully a few days, but it might be longer.) This is all because of an incredibly contentious election here in the U.S., the high probability of civil unrest and possibly even street violence, and the certainty of a stressful few days. I'm resting up for the former and will take some time off after the later. If we're lucky it won't be ongoing civil unrest, and I'll be back to listicles about craft by the 5th or 6th.]
I'm taking tomorrow off instead of Thursday because that's the night my clients at my other job want me to do a sleep over to Nanny Up at baby o'clock in the morning, so you have until THURSDAY, and then I'm putting this poll together.

So for any of you who have ever said "How can this poll not have SOANDSO?!?", now is your very last chance. Get it on the poll and get it some seconds. Or forever hold your cliché.

Remember, I don't do that endless quarterfinals shit anymore.  At most, I will do ONE round of semifinals. So the 8-20 with the most seconds get on the poll. And if those "seconds" are technically thirds, fourths, or fifths, then that's what I'm doing. So get over there and second anything you want to see on the page.

Please pop over to the original page (very important) to leave a nomination or a second. (I need them all in one place. Plus that is where you can check out the rules if you're confused about why I want some dystopias but not others.