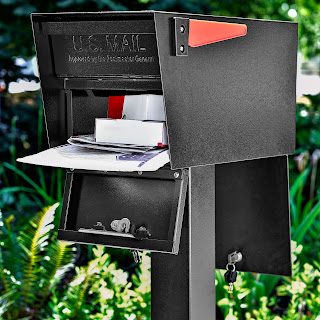 Should it be a screenplay or a novel?

[Remember, keep sending in your questions to chris.brecheen@gmail.com with the subject line "W.A.W. Mailbox." I will use your first name ONLY, unless you tell me explicitly that you'd like me to use your full name or you would prefer to remain anonymous.  My comment policy also may mean one of your comments ends up in the mailbox. Even if the name of the game is easy, peasy, so quick it's sleazy.]

How do you know when what you’re writing should be a screenplay or a novel?

Before I get into this question, full disclosure: I spent about 40 hours last week, over on NWAW, writing a post about voting, and then my nanny gig kicked in, so I deliberately looked through the hopper for the easiest question I could find, so I could set up this week to be just a little easier so I can recover from that. If anyone dropped a question when I put out the call (after my old computer died), I'm still going to hit those hard....and I'm still in need of MORE.

K, I'm going to assume that the first answer––the only answer that should matter––is a dead-heat tie between the two choices, but juuuuuuuuuuuuuuuust in case that's not so, let me point at it as we drive by on our way to a couple of paragraphs about the conventions of different genres.

You should write whatever you WANT to be writing. If you want to be writing a novel, don't let anyone tell you, "hey this should be drama/screenwriting, my good K." And if you want to write a screenplay, fuck the haters who say "K, sweetie, pumpkin, lambikins, oh love....I do believe what you have here should be a novel." The libraries of the world are filled with brilliant examples of one genre or another that maybe should have been something else but weren't. And frankly, the creativity required when a writer goes their own way is often the pièce de résistance that makes a work memorable.

If anyone tells you otherwise, yeet their haterade-sipping asses straight into the sun, K.

Okay, but let's assume you're right on the razor's edge of the fence. You absolutely don't have a personal preference. And as far as you can tell, your soul pulls in equal directions towards fiction or drama.

I'm going to tell you the party line and I'm going to base it in no small part on playwriting and the conventions of the "drama genre" which tend to push into screenwriting even though screenwriters have more "tricks" they can use in film, and then I'm going to give you a little bit of homespun wisdom that I've learned from watching no small number of writers tackle (or attempt to tackle and fail spectacularly) this exact genre crossing over the years.

I also want to make a disclaimer before I get into this. Screenwriting is its whole own thing. I know how to approach the writing end, which is why I'm talking a lot about playwriting and drama. I don't know much about cinematography, editing, or visuals. Many of the elements (like plot, conflict, resolution, structure, dialogue) overlap, but not all, and there is a limit to what I can say knowledgeably about screenwriting.

The party line has to do with the conventions of genre. For obvious reasons, plays (or film) will be extremely heavy on dialogue, and most of the plot revelations come out through people talking to each other, and in many ways the story "tells itself." Scenes are often longer (short scenes tend to be logistical nightmares), and almost all of your action takes place in only a handful of locations––simple locations usually in the case of theater. Movies can obviously be shot in exotic settings, but that tends to blow their budget. Some of the best plays, in their entirety, literally have ONE set. People just come and go over time. (All My Sons is two hours and change in the Keller's backyard.) And even in movies where the characters are "on the move," there are often simple outside establishing shots that lead to a scene inside a room or a tent or whatever. I mean of course you can't really do a car chase in a play..... You have a little more leeway for short action sequences than in a screenplay as you can do cuts and shots and such. Drama (on stage or screen) is a visual medium and leaves far less to the audience's imagination, but generally this is not in the hands of the writer who sticks with dialogue and some very sparse stage direction. Drama tends to be about moments and is very RIGHT NOW to the audience. You also really want to keep that shit economical. Audiences who will stay tuned in on anything but Hamlet, Lord of the Rings, Braveheart, or Titanic for more than two or three hours are rare.

Fiction tends to be a less constrained genre. You have a lot of exposition in text, plot developments that come into the story through non-dialogue, short scenes, shifting locations. Dialogue, when it happens, tends to bracket the really IMPORTANT exchanges. All the action, as well as the settings themselves, must be described and not taken for granted. There is a narrator of some kind (even if it's omniscient and third-person) who is TELLING the story. You can go into characters' heads much more casually (you don't need everyone else to freeze and a spotlight to come up for a major soliloquy or have some weird voice over if you're on film). Fiction can be more distant and less immediate than drama. And you have much greater latitude for long works. It is massively unlikely you will ever see a Tad Williams quadrilogy as a stage production.

Here's the thing though, K. None of THOSE things can't be worked around by a clever writer. Really. You are probably already thinking of things like voice-overs or a book that was super heavy on the pedestrian dialogue. Or you're essentially imagining the "special effects." And lots of film spend gobs on sets or locals. All true. So here's a bit of homegrown advice, something I've learned from half a lifetime of watching people try to cross genres either for serious or just to try their hand at it.

And this applies whether you're talking about screenwriting OR playwriting.

Are you willing to give up control to a director?

That's it. That's the ball game. Do you want to micromanage your writing or are you willing to give up creative control once your part is over?

If every single bit of dialogue has a stage direction (the stuff in italics) slipped in about how it's said, you should probably be writing fiction. If you have incredibly ornate descriptions of action, you should be writing fiction. Describe the setting in exquisite detail? Fiction. These are decisions a director will make, and they're not going to be thrilled to be pinioned by a writer. They create settings, block scenes, decide how lines should be delivered, and how to achieve effects. If you can't let go of all but the most significant stage directions ("pursued by a bear" or "Ari shoots Kate with a sniper rifle"), you probably want to stick with fiction. A director may even override your written stage direction, and you have no control over it. It's even possible (more likely with screenwriting than playwriting) that they'll edit out something you think is important––vital even––including whole scenes.

Conversely, if you are uninterested in taking on those descriptions of action, you might be better off playwriting. If you don't really care what the setting looks like, who is where in a moment, or who might get up and move to grab a glass of water. If you find yourself less concerned with the way lines are delivered and trust that someone will figure out how to deliver them powerfully, are okay being overridden, and if generally, you don't mind being the first step in a creative collaboration where you pass on your work to someone who might make any number of changes that you can't overrule, you are probably more suited to writing drama.

A really good literary argument that should maybe be its own post someday could be made for the fact that the director is a play's "narrator," who does all the work ahead of time so that the story tells itself, and in fiction there already IS a narrator who is telling the story. So if you are willing to give up your narrator, go with drama. If you are not, fiction.

But I'm going to loop around to the beginning for this one because if you're not on the fence, you should do what you goddamn want to. It's your art.