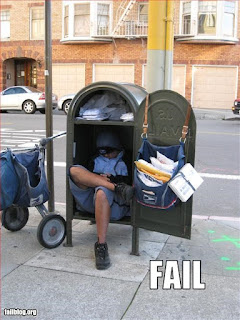 How do you get past failure and get to the good stuff in writing?

[Remember, keep sending in your questions to chris.brecheen@gmail.com with the subject line "W.A.W. Mailbox." I will use your first name ONLY, unless you tell me explicitly that you'd like me to use your full name or you would prefer to remain anonymous.  My comment policy also may mean one of your comments ends up in the mailbox. I need MOAR QUESTIONS!!]

How does one get past all the failure involved to get to the good stuff? I love writing, but I also am terrified of failing because of my perfectionism. You have said in the past that writing is at least 50% failure. How does one "fail" productively? Preferably in a way that doesn't make one terrified of writing?

There sure is a lot of question in this question, Catherine! Sorry that the answer gets a little long.

Honestly, most days I'm failing upwards. That is to say, I'm not hitting some goals, but I'm making forward progress on an overall objective. So I still get there, just not quite the way I envisioned. (Usually not as fast.) Did you know I was supposed to have a novel done three years ago? Yes. And a bunch of people HANDED ME MONEY to write said novel, so it's an extra embarrassing failure to be like three YEARS late and waiting for a vaccine so I can get out from under nannying so much and really get cranking on that first draft that isn't even half done.

Are you appalled? Right? There's some failure for you. And believe me, that's been a really tough one to handle as the years drift on.

Failure is the background radiation of most artists' existences. I can't think of a single artist I've ever personally known who's kept to a schedule for more than a little while or reached all their deadlines (external or self-imposed) or finished anything longer than a few-hour project––other than maybe freelance work––exactly when they thought they would. Certainly not any who I've read about (except maybe Stephen King on cocaine, and maybe we shouldn't get into that as a legit exception). In rare moments of success, we kind of leap forward, or we hit bellwethers that we ourselves have no control over (like reaching a million followers), and people tend to see those sorts of things as "success." But the truth is most artists (all?) are in a perpetual state of failure on some level even if it's their own unrealistic expectations. They've just learned a couple of things ABOUT failure...

See, whether ply their art as a day job or succeed in some other way that is genuinely meaningful to them, all artists who "succeed" have one thing in common: they never stop getting back up, dusting themselves off, and continuing forth. Failure is a crucible. A lesson. A teaching moment. But it wouldn't even occur to them that failure means it's time to pack it in.

I don't like peeing in people's Cheerios, and I'm making ZERO assumptions about you, Catherine, but sometimes I see folks who I know are not trying because they know if they fail, that'll be it. They won't get back up. One failure will be the end of them and at some level they know that. They just want to pleasantly imagine their lives after success.

Failing "productively" just kind of happens as you go. As often as I fail to meet a deadline (and it's a LOT), the thing I want to write eventually gets written. It just might be the next week or even the week after if I really hit maximum fail. The articles pile up, and people encountering the body of works I've written discover dozens, maybe hundreds of things they find compelling. Soon people are contributing to my Patreon. And my fiction lumbers along steadily. I have a friend in traditional publishing who is constantly failing at reaching her submission quota, her writing quota, her revision quota, and sometimes even her agent's deadlines. But the book gets written (late, but always eventually). Here and there, things are accepted. Slowly her career lumbers forward, and one day she has a (very modest) book deal. Then she's making juuuuuuust enough money to turn down a promotion and go down to part time so she can write more. She succeeds piecemeal despite failing constantly.

Not too many people actually ever get that "Are you sitting down?" phone call that is the stuff of narratives we love.

Did you know that I wanted to be a working writer by the time I was twenty? It's true. When that passed by, I adjusted it to twenty-five. Then thirty. Then thirty-five. Then forty. These were MAJOR goals I set for myself in life. Failures all. But I never stopped writing, and today I could technically eke out a living (even without a nanny side gig if I lived in a more affordable part of the country). That may look like a fantastic triumph and success to someone looking at my life from the outside, but for me, I blew an awful lot of personal goals along the way.

For artists, often it is our successes that don't feel real. They feel incidental. They feel like the moments that were either inevitable, and somehow trivial and unworthy of undue attention, or were undeserved splashes of fortune. We work on. The successes I SAVOR happen in the most unexpected hours: finishing a second post despite a double nanny shift or getting a political rant done with enough time left over on Sunday to play Spiderman on the PS4 until my eyes bleed. No one sees those triumphs. No one cares. They are quiet victories. But they are where my fist pumps happen.

That's my "good stuff," Catherine. That and simply writing every day without which I am kind of a cranky goblin emotionbomb. And maybe every once in a while that feeling of, "Holy shit, I'm doing it." You will probably have to determine for yourself what your own "good stuff" is and be realistic about how to get there.

How do you fail in a way that doesn't make you terrified of writing? If I wanted to go for the "That-Can't-Possibly-Be-As-Deep-As-It-Sounds" answer, I would say something cryptic like "Let me know if you figure it out, because I'm always terrified." And people would say. "Shit. That's deep. He's SO FUCKING DEEEEEEEP!" And maybe I'd even score some chic intellectual girlfriend who smokes through a cigarette holder and can't even handle how deep I am. She would have an unidentifiable European accent and would––

Writing is kind of terrifying. You are going to take your thoughts, and through the alchemy of linguistics and some weird-ass shapes that we've all somehow agreed mean certain things, PUT THOSE THOUGHTS into another brain across time and space. There is nothing about the thought of what happens if you do that wrong that isn't just a little bit terrifying. But if you keep getting up and you let your failures guide you and shape you but never define you and never ever EVER stop you, then you don't have to be afraid.

In fact, that's the way. You're about to go mud-wrestle life. If you treat it like "Oh shit. I'm going to get dirty," you're never going to make it. The minute you realize that the entire point is to get dirty and you absolutely ARE going to fuck it up, then you can relax and enjoy the ride a little. Failure shouldn't be something you spend a lifetime trying not to get on you.

There's a phrase you've probably heard bandied about in life or maybe in politics, but it's especially true in art: "Perfect is the enemy of good." I think art can get close to perfect. I think it can be so close to perfect that it takes another "maestro" to be able to perceive the imperfections. And even then, in many ways, I think the way we are imperfect as our skill grows is what makes us the most interesting artists. In many arts already, computers are capable of technically flawless performances, yet most trained artists do not find their work compelling in a human way.

But no art gets close to perfect without a lot of failure first. With any art, of course, there are years of drills and practice, but even beyond that, each artist crafts a single artistic moment over and over to approach perfection. With performance art (music, theater), it's rehearsals. With visual artists, it is painstaking attention to detail. And with writers, it is revision.

So figure out what your "good stuff" is, work towards it, and realize that failure isn't something to be feared or even avoided, but it's more like the crucible that will burn away the bullshit in you and your work––a fundamental part of every artist and their art. You don't get "past" it, you go straight THROUGH.

And that's how you do it, Catherine. Good luck!