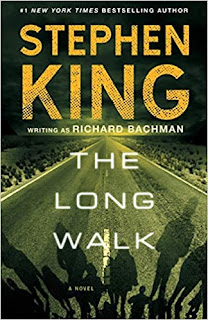 What is the best creepy dystopian book (or series)? Our latest poll is live! Come vote!

In honor of Halloween (since we did horror just last year) I give you the creepy dystopias. Not the uplifting ones with the plucky resistance carrying anachronistic weapons into modern day battlefields, but the ones with the slow burn reveal that something deeply disturbing is going on and the longer you read, the more dystopian things get. From your nominations the eight titles with the most "seconds" have been assembled.

I know I don't normally post on the weekends, but I'm actually taking a break because of the election coming up here in the U.S. (50% stress and brain weasels/50% anticipation of having to protest and march to make sure all the votes get counted), so I have deliberately saved up on the kinds of posts that I can do when I'm not in a writing sort of mood (admin and business type posts like this one), so I'll be catching up on all of that as a bit of jazz hands and hairography.

Remember that this poll is about BOOKS. If you thought Neverwhere was an amazing BBC miniseries but found Gaiman's writing to be a bit of a slog, then don't vote for it.

A sad note about our polling program: I think a couple of months ago, some polling company bought up all the little free poll apps and changed their monetization model or something. Used to be there were all sorts of ways to put a poll up, and as long as you didn't post dozens of polls a month, it was free. Then, all of a sudden, it seemed like they all switched to another model overnight. They still let you put up a "free" poll, but you are limited by THE NUMBER OF RESPONSES. And if you go over it, you have to buy their premium version. Well the number is limited to something like a hundred a day. On a good day and a rowdy poll, WAW will quadruple that or more. And I'm not going to pay $20/month for something I use once every two months. I may not be their target freemium demographic (few polls/lots of responses rather than several polls/few responses), but they've forced my hand. I'm switching to Google Forums. Which sadly means that the results of the poll will not be visible to everyone until I post the results. It's also much less "pretty," has a lot of crappy formatting, and you have to use the scroll wheel to get down to get all the results.

If anyone knows a way around this, I'm totally listening.

Everyone will get three (1) vote (another downside of the new program). Use it wisely.

The poll itself is on the bottom left of the side menus, below the "About the Author." If you are on mobile, you can switch to "web page view" and scroll all the way down. Sadly the new program allows no way to use a direct link. Yet another issue with it.

Here are the titles on the poll: