The Trouble With Short Stories 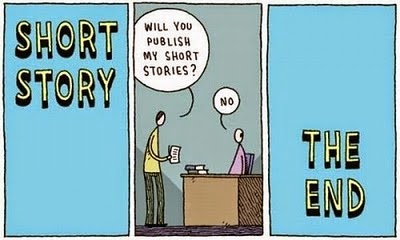 "What are you dying to write," Janusprof asked me.

My answer blurted out immediately, before I'd even consciously thought of it. "Longer things. Novels. Series."

"That's not an answer!" he insisted. "I mean what do you really want to write?"

I knew what he wanted. He wanted some touchy-feely internal conflict that had torn my soul apart and drawn me to the blank page. He wanted my "true" pain or some artistic cliché. I probably could have given him a shlocky answer like "redemption" and talked about how many of my stories explore someone struggling to be good when they don't even really know what that means. That would have given him a fine-arts boner.

Unfortunately, he didn’t really get how genuine my answer was.

The pedagogy of most writing programs seems to focus on this imaginary "true" reason that a writer is dying to write. It’s born of a “high-art” ideal about the nature of inspiration and expression and what “counts” and what doesn’t (and seems to be the reason that most MFA programs produce a laughably huge outpouring of literature about the horror of white, middle-class childhoods with mild drug experimentation).

Because, you know...that's pretty edgy.

Somewhere along the line, while the “high-art” instructors are wringing out their souls for inspiration, passing judgment on what isn’t art (perhaps with the scathing invective of “popular”), and excusing the fact that they spend an inordinate amount of time focused on what to write instead of how to write it because they are "academics in the school of humanities," they forget that most students attend college to learn a marketable skill set—not to be molded into a cookie cutting of the same bourgeoisie aesthetic and told what to enjoy.

The real fuck of it is that the question could possibly have been a valuable one from one in the position of mentor. It was clearly the sort of Dead Poets Society, search-your-soul moment he was gong for. But those only actually work if said mentor does not have a predetermined sort of answer in mind. Janusprof obviously did.

I, in stark contrast, was being quite reflective and sincere when I said it. I learned something about myself in the alacrity of my answer, whether he approved or not.

The short story is the format that is most convenient both for reading and writing in college. It fits tidily into a classroom structure. If you take on a novel, it has to be a big chunk of your curriculum, and writing something longer would take an entire semester. So when the lessons are coming once a week, the realistic format to work with is the short story. If the students want to take the tools they learn into something that goes beyond the scope of 45 hours of lecture, they can.

It's not a bad thing, mind. Most writers (including me) could stand to learn how to be concise rather than verbose. And I appreciate the short story as an art form probably more than the next guy—unless I happen to be standing next to a Pushcart editor or something. It just suffers from being convenient. Short stories also tend to be the medium of foot-in-the-door in traditional publishing. A few short story publishing accolades will get your manuscript a more considered look by an agent. At the time I did not know I would be passionate about non-traditional publishing, so I figured more short stories were in my future.

But what calls to me, what I yearn for—both in reading and in writing—is longer works. That is my inner fucking urge, and everyone hoping that my step-dad diddled me or that my teenage angst at being a D&D nerd cut me to the quick of my soul is just going to have to be fucking disappointed.

I read Gone With the Wind before I had acne, just because it was the thickest book I could find in the A.E. Wright middle school library. I gathered cans from around town for two days to scrounge up the money to purchase Stephen King’s It, mostly because I was aware that it clocked in at over a thousand pages. I even tried my hand at War and Peace just because its heft felt so....comforting to me—although I must admit that one never got finished. My principle complaint with my Kindle is that I can’t hold a book like 1Q84 and feel its heft against my palms.

I particularly enjoyed series books. I could stay in a world and with a character for weeks. More than once I blew months worth of allowance on a run of novels because I’d enjoyed the first and I wanted (needed?) to be able to pick a new one up as soon as I was done with the old. No interruption was acceptable.

It is then, with Ben Stein caliber lack of shock, that I discover my proclivity toward writing the same.

I imagine full and developed arcs based on childhood books and movies, and sometimes even picture epic quests that I cannot tell outside of a trilogy (or more). One of my bucket list works (writers bucket lists don’t involve places they should go; they involve things they should write) is an epic high fantasy chronicle that sits firmly ensconced in my head that would be no less than five or six volumes.

I was always “writing books” from about nine or ten on. I sent more trees to their doom commandeering notebooks and legal pads in order to begin some opus or another on than I will ever admit to a nature conservationist. In high school, my successes and my failures finishing manuscripts all began as "novels." It never even occurred to me to write a short story outside of an English assignment.

When I got into college, I wrote a lot of stuff I didn’t want to write including essays on the effect of nonoxynol nine on latex and fifty page research papers on "the model minority," but I always brought my "A game" and wrote my heart out  because I figured every lesson that put a tool in my toolbox was a lesson worth having as a writer. If I was going to stop working a "real job" in my thirties to give that much time and effort to something, I was bloody going to suck the marrow out of it. I even worked around the “no genre” pedagogy with nothing but an eye-roll. I wanted to be there. Bad.

However, whenever I read a successful writer's advice almost all say some variant of the following: write what you would want to read.

Forget the snobby lit sommeliers that haunt the Humanities buildings of college campuses and concern themselves with how “literary” a work isn’t, uttering phrases like “worthy of fiction” in a way that makes it clear they are imminently qualified to determine such things. Forget the promotional guru who has come up with a Venn diagram outlining various demographics and where the most “accessible” story possible would be located. Ignore the well-intentioned family members who tell that you should totally do a book just like Harry Potter/Twilight/Da Vinci Code/Whatever’s Selling Like Mad. Ignore them all.

Write what you would want to read.


For me, that is books, trilogies, epics. I want to create worlds. I want to make people regret turning that last page like they would regret saying good-bye to an old friend.

Janusprof shook his head and turned away from me. In his mind, I had failed. I was Luke and I just couldn't get the X-wing out of the swamp. He paid a lot more attention to his nachos after that. His replies became curt.

I found it enlightening, personally. My answer was firm and immediate. It came out of me almost before the question was finished, burbling up from some place that didn’t even have time to mull it on a surface level. My gut knew something I didn’t. I don’t think, until he asked me that question, if I knew just how much I was really tired of being forced into the square pegs of short stories or how much I really yearned to get back to some of the unpolished and half-finished manuscripts and even some new stuff that had bubbled to the surface over the years I was stuck in school.

He reminded me why I wanted to be a writer in the first place.

[This article has been revised from an earlier version. If you are interested in the original, you can find it here.]
at June 15, 2014

Email ThisBlogThis!Share to TwitterShare to FacebookShare to Pinterest
Labels: Sunday Rerun, The Neglected but Loved