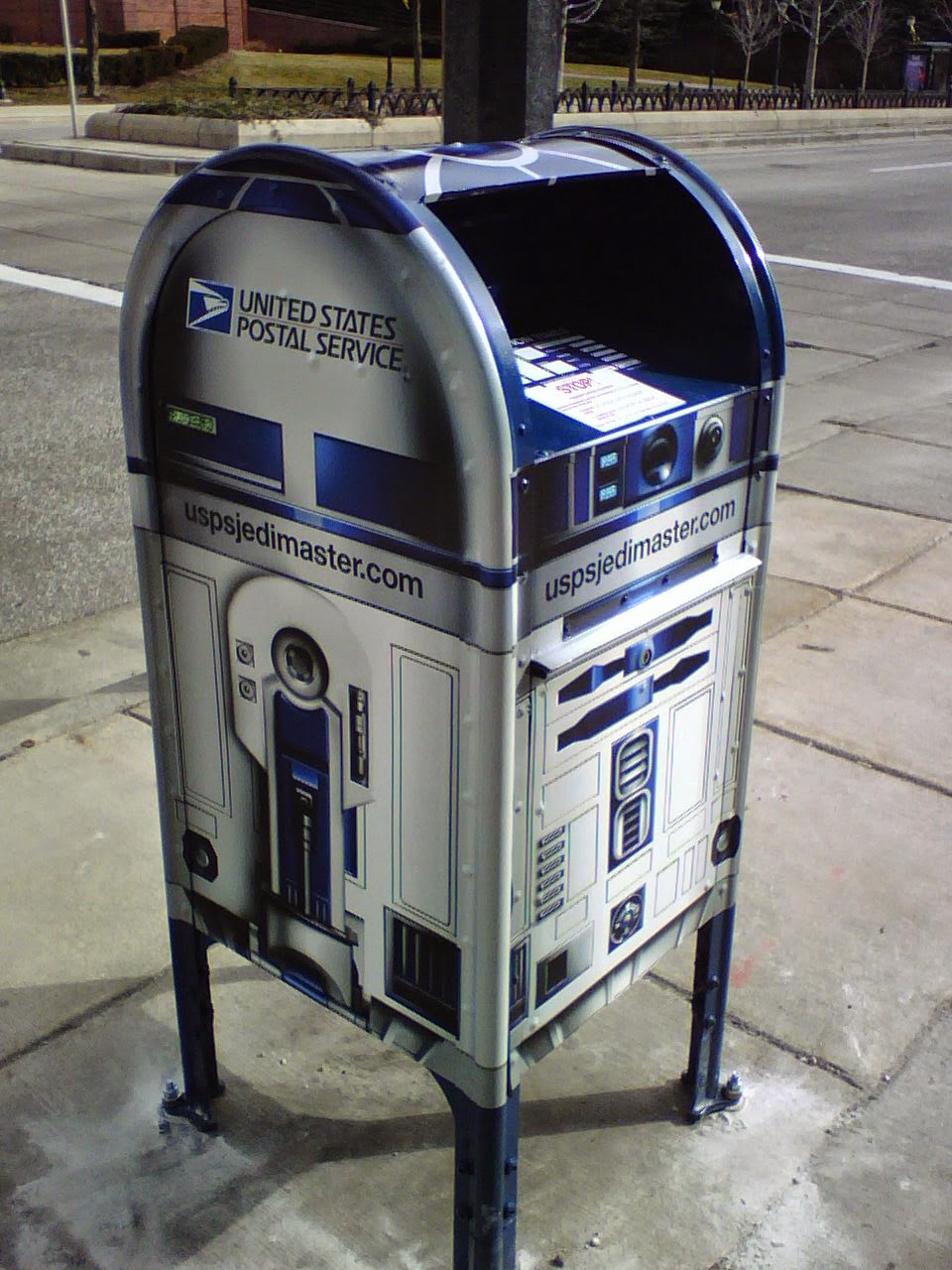 [Remember, keep sending in your questions to chris.brecheen@gmail.com with the subject line "W.A.W. Mailbox" and I will answer each Monday.  I will use your first name ONLY unless you tell me explicitly that you'd like me to use your full name or you would prefer to remain anonymous.  My comment policy also may mean one of your comments ends up in the mailbox, but likely only if you ask a question. I especially love complicated questions with two part answers because then I can milk another day's worth of content out of them.]

"Hey Chris! I just recently shared this article on on my wall, from io9. It started a lovely and spirited discussion on two subjects I'd like to pick your brain on:

1) Does a "trope" necessarily have to be bad? We were discussing definitions, and my friend believed that the word "trope" always means "tired" or "cliche."

God why can't you people just be happy with the thirty-eighth sequel of the the fifth reboot of yet another movie made out of an 80s TV show. Because those are what's original.

So no shit, I've been meaning to write about this for a couple of months now. It's just been tough with parties and holidays and in laws and Santa Bots and peeps who have cancer. So thanks for the kick in the ass.

Not to impugn your friends, Mike, but there are basically two kinds of people in this world. People who know JUST enough about tropes to think they can be elitist about not liking them, and the people who have actually been exposed to enough stories (or film) or have studied tropes enough to be aware of how fucking absurd the first people are.

Okay maybe there's a third type who don't know what a trope is, but you get the idea.

I'm not just being an ass. There's a phenomenon where once you deconstruct enough tropes in enough stories (or films) you find that it is hard to ever look at ANY story the same way again because you're hyper aware of all the tropes the story is using. It's like seeing a mark on a movie theater screen. Ironically, this phenomenon is actually a trope itself.

You better buckle up kiddies. This article is going to be Tropeception.

If you've taken a look around TV Tropes, you know that there are a lot of tropes. I don't mean there are like a couple hundred and you should learn them all and avoid them. There are currently 21 THOUSAND tropes listed there. If you could commit a hundred tropes a day to memory, you would still need to work tirelessly for about eight months to learn them all. There is absolutely no way to avoid putting some in your story. As you've said, every story has been told and in certain ways. Plus, what makes it even more impossible is that trope defying (that is doing the opposite of what the trope would expect you to do) is....wait for it.....a trope.

Are you kind of getting the picture here?

So there's one possibility here that you and you friends are having purely a semantic debate. If you are fighting literally ONLY over what the word "trope" means, I can't much help with that. It's like an engineer and a psychologist arguing over the word "stress." There is a sort of "layman" definition of tropes that only means OVERUSED literary devices, but that's also a shortcut to its analytical meaning that is kind of like the way most people use the word "theory" who aren't in science.

Literary and film critics find that definition rather meaningless. The problem with it is that it's pretty slippery how subjective it is. Anyone can "No True Scotsman" anything you don't find overused. ("Well, that's not a trope. This is a trope,  but that's not....because fucking well I say.") In this case people tend to use the word "trope" when what they really mean is "convention I am not personally excited about myself."

That's when you get people delighted that they're watching a movie with the tired old trope of the dangers of science rushing ahead without considering the consequences because, "OMFG it's got CGI dinosaurs!!"

Can it mean tired and cliche? Sort of. It's sometimes used as a shortcut for saying that, but in a discussion OF tropes the full breadth of it is usually acknowledged. That's not really how it was ever used in literary circles and film schools, but even to the layman, the definition has widened considerably with the advent of the internet and sites like TV Tropes.

However, once we take out the value judgement of "overused" or "tired" (because who really gets to decide that?) tropes are really just frequently used literary devices that you see over and over (and sometimes over and over and over and over) in stories. Now stop and think about that for a second. Think about just how many things happen in stories over and over and over again. Things like climactic battles, emotional decisions, making up and breaking up, good vs. evil, larger than life heroes, duels, romance, comedy, horror. If your friends are going to move the goalposts (giant robots are a tired cliche, but laser swords aren't!), there's not much I can do to help you, Mike, but any genuinely analytical discussion about tropes has to incorporate the non-subjective definition of a repetitive literary device.

Generalizations about tropes are like most rules in writing, if you try to come up with some wisdom that will fit on a bumper sticker, it's already auto-fail. "Tropes are always tired cliches and shouldn't be used," is the kind of pithy bullshit that belongs in the garbage next to: "Don't write in present tense," (yeah, unless you think authoring Divergent or The Hunger Games would suck), don't write the way you would talk (yeah unless you think Andy Weir's breakaway first novel The Martian, which is now going to be a movie, is no good or that Stephen Brust is a hack), don't write about small children (because who would want to pen the next Harry Potter or Percy Jackson novel).

Here's an analogy that helps me: tropes are kind of like language. When human beings tell stories, we have things we stick to because other people recognize them. Some tropes function like the fundamentals of storytelling. They are so common that they're practically invisible even though they're in just about EVERY story. We expect there to be things like a relatable protagonist, an obstacle, some sort of antagonist, and characters (all tropes). It's not that we can't handle stories without these things but they would be like a sentence without a subject or a verb. (The fundamentals of language.) They seem strange, unnatural, and take time to parse and we expect to be eating stinky cheese and talking with people about how anything non-independent is selling out. We generally look for a narrative arc, conflict, and at least the hope of overcoming the obstacle. The fact that these are literary conventions makes them tropes but we don't notice them.  We don't notice them in the same way we don't really notice verbs or nouns linguistically (unless we're studying the language itself) because according to linguistics we're basically hard wired to need them for meaning. Similarly our storytelling is a part of our humanity are so ingrained into our storytelling milieu we are hard wired to need them.

(I could probably bust out another post about how storytelling is almost the only thing that makes us uniquely human and so we all tend to tell stories in fundamentally the same way, but perhaps another time.)

Other literary conventions function a tiny bit more noticeably, but are still mostly invisible. They are like the grammar of language. We might know several different genres of tropes in the same way we might know a few different languages. We sit down to a romantic comedy with different expectations of how the story is going to go than we sit down to a horror movie. Each genre has its own conventions. But just like the grammar of actual language these can be bent or broken to great effect. We expect to see couples end up together in a romance. We expect something magical in a fantasy. We expect a high body count in a horror. We know that there will probably be faster than light ships in sci-fi. (And we would be very confused if there was a body count in a rom-com or a dragon showed up without explanation in our gritty drug culture movie. Or if our superhero movie suddenly had Captain America dying of sepsis from a gunshot wound to the foot.) It's not a bad thing. It helps us parse the story. Just like we know that an English sentence is probably going to have an S-V, S-V-O or S-V-C structure. That doesn't eliminate our ability to be surprised by a sentence in any way.


And then there are overused tropes. They function the same way that overused turns of phrases do. Some tropes operate in a similar way to words like "frenemies," "totes" or "amazeballs." They might be new and bright but get used so often and so frequently that they burn out like a shooting star. Think of the way every damn movie trailer uses a trombone blast since Inception came out. Others of these cliche tropes have been overused for a long time like having someone talk about someone who is standing right behind them, how killing the boss always means all the underlings just fall dead, or how saving the girl almost always means GETTING the girl.

And yeah there are some of those that need to be put out to pasture. And then shot. And then beaten. And then nuked from orbit to be sure. Which is now a trope.

However, writing a story with no tropes would be like writing a sentence with no cohesive thought pattern.

Gone, as well, I mean in addition to, would be such things as–important things as–punctuation that is isn't not useful but rather a high school student, that is to say is like a cummings poem written by one.