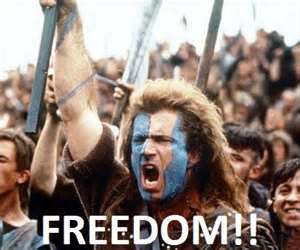 Four more class sessions teaching middle schoolers who would rather be getting root canals a few precious study skills that may or may not help them come their fall school year.

Technically it's six hours and thirty minutes with two classes of one hour each, but who's counting.

Technically, it's not even two more days. Because it's today in a couple of hours, that means that it's only about twenty-seven more hours. If you think about it, that's not much more than one day, really.

And then....Summer school will be OVER.

So if you hear a distant, and somehow equal parts anguished and relieved cry coming from the SF/Bay Area, it's because this will be me in a mere 27 hours:


Next year, I know better than to let people convince me that I will have no shortage of housecleaning and kid wrangling help and that I won't be simply adding a couple dozen hours a week to an already impacted schedule. It was a lovely sentiment by people I know meant it at the time, but somewhere between expectation and execution, we all wandered off the path, and if anything I ended up a little more busy than even last year at this time.

Next year, I'll make the call of whether to teach or not based only on how life is going, and not the some promise of toddler tag ins and housework help. It's a lot of money, but your generous donations have ensured that I don't NEED it, and I'd rather bring you a quality schedule for those six weeks.

If I seem like I'm being seduced by the promise that I will be able to teach and write, flood my inbox with reminders of this very entry and don't let me fall prey again. Fool me three times...or something.