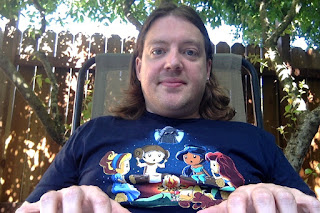 There are so many things spinning through my head, each competing for the space and attention of today's personal update and each probably worthy of a proper word splat. And still, I have to truncate this post to finish up an "Inside Scoop" e-mail for higher level Kickstarters and Patreons (still a chance to get in on this round if you hurry!) I'll try to share some of the disjointed images in a stream of consciousness.

I'm not exaggerating when I say this last week was the worst of my life. And that's saying something given the stiff competition at least half a dozen weeks would be giving it, just in the last 15 months or so.

But then the hydraulics kicked back in, and even though we were all sitting there, still wearing the oxygen masks that were hanging from the ceiling, the angle of the floor was level and the cabin lights even flicked back on. We started to exchange tentative glances with each other over the yellow cups that encompassed our mouths and noses.

A nervous laugh/cry started from the back of the plane, and spread like wildfire.

I've written so much in the past year and change about writing through the tough times that it almost feels like it's getting cliche to keep going to that well, so instead I'll just tell you this: I've been writing for five years on this blog, through some of the worst parts of my life, and even though there is a water's edge of stories I can't share because they reveal details about others, you've gotten to see me pinned to the wall like an insect with my innards exposed. There is every reason to tell you that's where the sweet spot is. I've put aside my writing when life got hard before (in my 20's and early 30's when it got pretty damned hard) and then had to go through months of trying to get back into the groove through morning writing and exercises. But if you keep coming to the page, even if it's just an emotional splat of a journal entry, it becomes easier and easier to use that emotion. To bring an amalgam to your writing an alloy of your emotions and creativity.

And I'm not saying every artist needs to suffer. But there is a power there if you learn to tap into it. An energy that is like touching something primal.

In what feels like the beginning of a teaser trailer, I'm looking at my schedule and my future schedule, and the massive passing body that almost crashed into into my world but has altered the geography with its gravitational ripples nonetheless. Cracks fissure the landscape as I watch. Plateaus collapse. Rock formations burst from the ground.

"Everything is about to change...."

The admin weekend was great, but I only managed to clear out part of a massive backlog. I might need another one sooner rather than later until I'm caught up. But I got some good work done on the blog.

I was revising something last night.

Something that draws pretty up close and personal.

The character's stepfather presses him into a wall, menaces him with a far larger frame, and grits through clenched teeth: "Chris I'm going to beat the crap out of you if you don't stop this shit."

When I found it, I just stared at it for about 10 minutes.