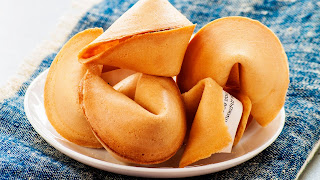 The number one cause of writer's block is not trusting the process. It's when you think your first "first sentence" has to be absolutely perfect that you freeze up. When you truly accept that you're going to change it fifty times, the stakes are low enough that you can just start.
All writing is political. Even if you are trying to write in a completely and deliberately apolitical way, what comes through is complacency and comfort with the status quo. "Nothing is wrong, so let's not talk about it!" is absolutely a social and political stance. Look around you at the world. What do you see? Inequality? Injustice? Inhumanity? Poor people? Rich people? Exploitation? What does the political landscape look like? Who is getting screwed? Whose story is being ignored (or more likely shouted down) by others? And whose lives are pretty good so that they would want to avoid those topics at any cost? What are the truths we cling to, and how do they depend greatly on our own point of view? How are the stories of who we are and how we got here shaping and framing the way we look at (and avoid looking at) things?

You can enjoy writing exactly when and how and where and for as long as you want as a hobby, and even fling stuff around when you want for some spending money, but the minute you want writing to be your paycheck, you're going to spend some annoying-as-fuck days doing shit that isn't writing and you don't want to do.

We treat our brains like they're these psychic entities that live on other planes of existence that can only be reached by astral projection from the psi-vortexes within our skulls but our brains are right there with us not getting enough sleep, hurting from stress, and feeling kind of sick when we eat too much greasy food. Exercise a little (if you can). Eat decently (if you can). Drink enough water. Take your meds (if you can). Your brain is an organ. It's pretty awesome, but it has never NOT been a part of your body. 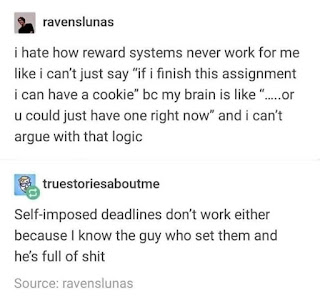 Your mindset is more attuned to geography than you're probably ready to deal with. It's the reason you can switch rooms and forget what you were thinking of, but if you go back into the old room, you'll often remember. It's the reason that as soon as you come over the hill on the way to the next town over, you start thinking of how good that one restaurant is.
And it's gonna mess with you when you try to work from home.
You've got all those spaces that are for other things. If your couch is for relaxing, that's not a good work spot. If you basically only sleep in bed, even propping yourself up, you're going to be tired. If the kitchen table is where you eat, you're going to be hungry all the time.
We writers learned long ago to carve out a spot that's just for working.

A body count will never raise the emotional stakes by itself, and it's usually bad writing to try. You have to rely on other tools––and better writing.

A lot of people feel a lot of different ways. And that's all okay. There are no wrong answers when you're sheltering in place, worried about the entire world but especially Nana and your friend who had chemo and radiation for Non-Hodgkin's lymphoma five years ago, and watching your leadership strategically NOT CARE how many people are going to die so that Game Stop and Starbucks can open back up right away. It's okay to not be okay.  In fact, you probably shouldn't be okay.  We're deep in uncharted waters and someone used the map back to normal as a quick fix, back when we thought we were going to run out of toilet paper forever.

One of the problems with our deepest and darkest anxieties is that we let them hang out in dark corners and imagine that they are huge and insurmountable. We listen with half an ear or try to distract ourselves or cover our (proverbial) ears and refuse to listen as soon as we realize that they are voices we don't like. When we only get part of the message, it becomes so easy to imagine that the rest is even worse. Sometimes we make fears and anxieties a hundred times worse by letting them live in shadowy corners where we can imagine they are so much more powerful and have so much more to say than we've ever even heard.

Fans are not friends. They can become friends, but most will come and go very capriciously. More so than people you meet through regular channels. It is important that artists and entertainers who are beginning to touch that spark of fame keep themselves protected by not assuming (initially) that those relationships bear resemblance to true friendships, no matter how much adulation or seeming intimacy pours out from them.

When we book nerds go to see movies, we can accept that (if we're lucky) we're going to see a bit of audio/visual media roughly similar to the book we like with some familiar moments that hopefully cleave close to the spirit of its source material. But we're not going to get "THE BOOK ON SCREEN™," so it's important to remember that we're watching the movie for a MOVIE'S sake and that it's an adaptation.

You don't even have to lie in order to frame a narrative. You just have to decide where to start, where to stop, and which parts to leave out. By not letting certain people speak for themselves, suddenly you have a story that is factually accurate, but not truth.

Reading with compassion is the great equalizer when it comes to trite advice like "write what you know." (None of us know what dragons or space cruisers are like, but writers have been doing just fine with them by using their reading, empathy, and imagination.) Because given time, a good reader can "know" almost anything. Not because we go through the experiences ourselves, but because those who do often write about them. And we have the whole of human experience at our very adept fingertips.

Yes, there are influences that are unearned advantages of birth and cannot be controlled, like being a cishet white dude, or being raised middle class by formally educated parents. There are a few things that are like "force multipliers," like having social media outreach, nepotistic connections in publishing, or some entirely-unrelated-to-writing fame. But no one ever EVER "made it" without working outrageously hard and probably pretty close to daily.

Not a racist who walks this Earth does not justify their behavior with STORIES. Not a single misogynist. Not a single transphobe. Not a single bigot. It might be stories their parents told them. It might be lies repeated so often they accepted them as truth. It might be narratives they never unpacked that come from poor representation in media. But it's stories all the way down, and that is part of the reason fiction can be so fucking powerful.
I know it's shitty to realize that you probably won't establish a writing career if you don't overdo it at LEAST a little, and everyone has to find their own peace with that and their personal strategy for surviving capitalism. Probably most people you ever knew who were fantastically good at something overdid it a little. Had long days. Worked weekends. Gave it more gas than the folks who wanted a functional work/life balance and a robust set of complementary priorities. And while you absolutely want to make sure you know that writing (or art of any kind) is work even when it feels like it isn't, and that you factor in enough self-care to safeguard your health both physical and mental, you also have to understand that you are your own "boss" when it comes to writing, and your ambitions are directly tied to just one fucking metric asston of hard work.