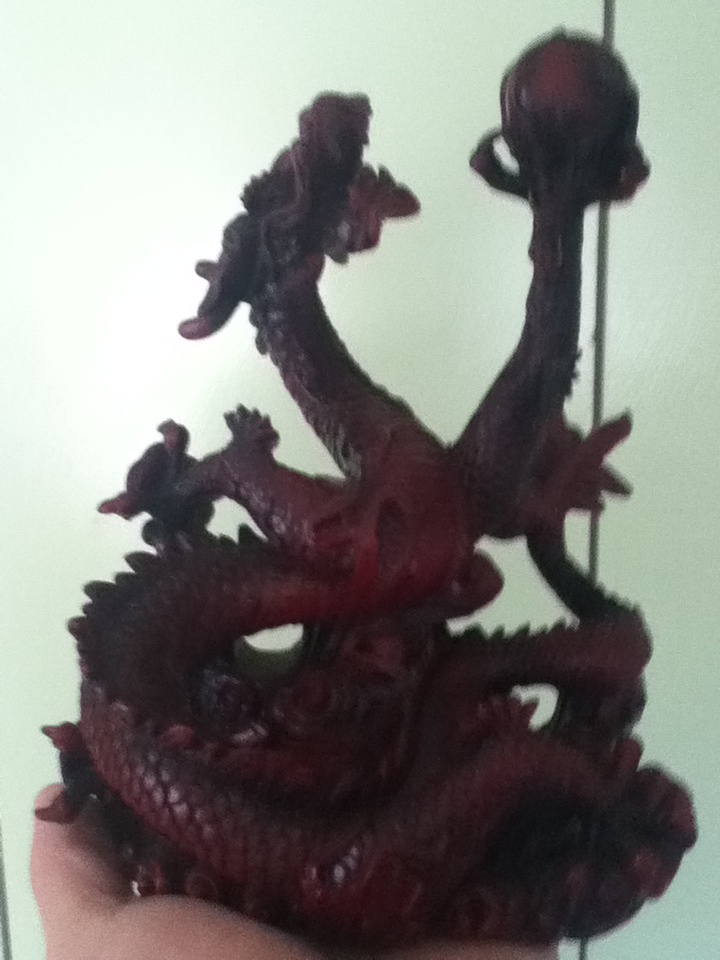 She takes the form of an Asian dragon wood carving that sits on my desk, and she comes to life when no one else is watching. Then she threatens me with unspeakable torment if I don't get back to writing.

Last week she mentioned that she found the sewing needles in the third shelf, and how much they would hurt if she used her fire to make them white hot and then shoved them under my cuticles while I slept. Then she asked me how that story I was working on was coming along.

She really likes chasing the cats around the house, and has an unholy penchant for Tim Tams (or Arenots). She eats entire bags of them in a day, for which I always end up getting blamed.

Blog's theme song is "Big Time" by Peter Gabriel which it listens to it every morning when it wakes up--right before it looks at itself in the mirror, and says"You know who's going to hit 1,500 page views today? You are, big guy. You are!" My blog thinks big, dreams big, and has wild dreams that aren't even remotely realistic for an unpublished writer's blog. Blog constantly gets me psyched up for goals I can't possibly hit. The worst part is that he doesn't care that I'm the one that has to do the actual work. He wakes me up each morning by screaming out "Hey, I'm not going to write myself over here!"

Vera came to me under strange circumstances, but after a horrible data loss involving Dropbox and Microsoft, I really wanted to switch to a Mac for a dedicated writing implement.  Vera knows she's an affectation, but she doesn't mind.  She likes me to use her–which is a lot less kinky than it sounds like.

Technically, this is Cathamel's boss.

Art doesn't manifest directly within my life very often, but when she does, it is usually to extract some horrible price for my continued love of her. Though from time to time she actually does something nice for me in return. She is a capricious and jealous and I might even go so far as to say "insecure," but if I said that, she would probably show up right now and absolutely kick my–
at August 24, 2014