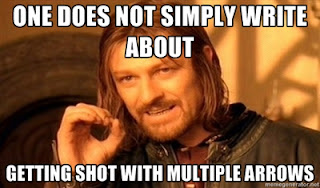 Hi everyone.  Leela Bruce here.  Today will be short and sweet.  Well....shorter and sweeter than my normal ass-kickings, anyway.

But it's just desperately ignorant advice in need of a serious ass kicking.

There's not a lot of evil advice running around the world unless you're asking some dude with severe "nice guy syndrome," who likes you, for dating tips on getting the older, tattooed motorcycle guy to ask you out.  But most of the advice I beat the shit out of isn't completely wrong or off base.  It's kind of right.  It's just that people treat it like it's always right.  People treat it like it doesn't come with context. People distill it down into fortune cookie wisdom and bumper sticker platitudes.  And that's when things get dangerous.  When a complex idea is spat at young writers like some sort of advice Pez dispenser, and they dutifully, sincerely, and reverently carry that advice into their writing and pass it on to others, that's when the problems start.

No advice to writers--none--is as guilty of oversimplifying a good idea to the point of being bad advice as "Write what you know."  No advice is more misunderstood, less contextualized, more helpful when cocooned within subtle shades of nuance, and more harmful when lacking them.

And that's why I have to kick its ass.

Millions of writers flutter across the earth parrotting "Write what you know.  Write what you know," like some horrible macaw that has been taught a single phrase to get its food, water, pets, and cage cleaned.  The offerings of fiction are filled with nothing but highly autobiographical characters of entire generations of writers.  And the writing programs of the entire English speaking world seem unable to conceptually grasp the idea that their students might want to write something other than their own story with a few cosmetic details changed.  Much of "literary fiction" and the outpouring of MFA programs is so transparently autobiographical as to be the basis of many literary genre cliches. 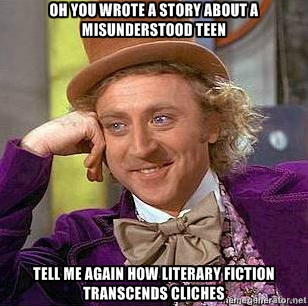 Let me start with a power-fist of bluntness to the face to set the tone for the savagery of the ass-kicking that is about to take place here.  I'll even make it bold and big and put it in the quotation font just to slam this mofo home extra hard with hard sauce:


Unless you want to publish your goddamned fucking diary, you will ALWAYS be writing some stuff you don't "know."

If you want to embrace essentialism as a writer, all your focalizer characters must be your race, your sex, your gender,  your religion, your creed, your political philosophy, your socio/economic class, your education, have pretty much your abilities, and be roughly your age.  Because, you can't possibly imagine what it's like to be anything else. 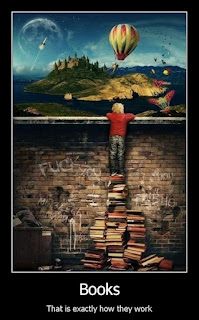 Sound like much fiction you've read?  No, and that's why I'm power punching this advice...again.  Half the fun of fiction, more to some people, is how it can render experiences to us that aren't banal and pedestrian.  Look at this picture next to this paragraph.  Is this kid looking over the wall to a seedy rehab facility.  Is there a pair of disapproving parents whose religion makes it impossible for them to support their child's sexuality?  Do you see a widower or divorcee raising three kids on their own?  No man!  It's like rockets and balloons and shit.  The rehab and the mean parents kind of look like the side that the kid is actually on.  Sometimes "what we know" kind of sucks, and we want to read about anything but that.  It's even got a name--it's called escapism.  We wouldn't be able to get very far if we only ever escaped to what we know.

So as I pepper this advice with body blows to slow down its reaction time enough to start getting in some kicks let me just point out that even as bumper sticker wisdom, "Write what you know," fails the test of good advice because it would be better, even reduced to some platitude, by saying "Write what is familiar."  It's true that you can't plug into someone else's brain and experience what they've gone through, but that is why empathy is so important to a writer.  A writer forms experiences they haven't gone through by drawing on experiences they have gone through.  We may not know exactly what it means to lose a father, but most of us have experienced loss.  We don't have to experience our father's death to have a character who does.  Write what is familiar more accurately encompasses this.  You don't want to go so far out of the range of your own experience that you have no idea, but "what you know" probably has more core truths and thematic experiences to extrapolate quite a bit further than your own pedestrian life.

It's true that you don't want to write what you don't know.  If you have a car mechanic as a character, and you want to describe their job in detail, you better not say that the chasis is a little bit that goes in between the transmission and the drive train.  If you want to extensively detail the use of tachions in your faster-than-light space ship, you probably want to know what a tachion is and how it works.  You'll end up with Prometheus level stupidity if you don't.  But it's just as easy to avoid those things directly or have a focalizer who doesn't know how shit works.  We don't care that Star Wars has sound in space, lightsabers, and space stations that would take a billion workers a thousand years to build but somehow show up without anyone having heard about it.  We don't care because Star Wars never tries to explain that stuff.  We care greatly about The Force being a bunch of microorganisms in someone's body because that tries to explain it...in a really stupid way that ignores a lot of fundamental aspects of human nature and science.  Seriously watch Gordi LaForge go on for five minutes about the positorons in an anular confinement beam and no nerd will even stir, but if Sherlock in the new series says he's not a psychopath but a high functioning sociopath, a thousand bloggers rush to their computers to point out that, psychologically speaking, those are the same thing.

But don't get too comfy, bad advice.  I was just giving you a breather.  And the foreshadowing for the spinning kicks that are coming next were all over the last paragraph.

Speculative fiction isn't what writers know--it's exactly the opposite.  And while that might make the "literary world" insist that it's not realistic, I have it on pretty good authority that Mirakame, Martin, LeGuin, Orwell, Bradbury, Tolkin, Shelly, Heinlein, and half the pre-20th century authors of the Western Canon say that the literary world can go fuck itself.  H.G. Wells specifically coined the term "Lit snobs can eat a bag of unwiped asses."  Speculative fiction draws on what the writer knows at its emotional core and explores what is familiar through an imaginative lens. These writers use a fusion of what is familiar and what is absolutely not what they know even a little to create something wonderful.  How dry and dull and boring the world would be if Pullman, Caroll, Ishiguro, Lewis, and even "commercial" writers like King, Rowling, and Chriton had stuck only to what they knew.

For the final back spinning side kick, I would point out that as a writer, you are a reader.  You have to be.  And a reader knows so many things--so very many things.  A reader knows what it is to get expelled and have a breakdown in 1949 Pennsylvania.  A reader knows how revolution can go wrong and the revolutionaries can become the very thing they sought to overthrow--be it a farm or a nation.  A reader knows that the next door neighbor might have a horrible reputation, but most people are good and decent once you get to know them.  A reader knows how even the most pure hearted can be corrupted when they hold true power and that even those who don't want such precious, precious power, find giving it up to be impossible.  And a reader knows that the world is filled with beautiful roses, but the one back home that loves you is special.  What a reader knows spans the slaying of Smaug and the Battle of Five Armies to the eradication of the Bugger's home world by some kid in the G.A.T.E. program.  Readers have lost spouses, climbed mountains, come out to their parents, and hidden the truth that they killed their best friend.  They have faced impossible odds and won, and faced reasonable odds and lost.  What a prolific reader "knows" spans the length and breadth of human experience even through time and space.

Never EVER discount this knowledge.  For while there is always a disconnection between reading something and really experiencing it--a difference that is not lost on any writer of even minor merit--a writer has the tools to take what they know, what they've read, and their carefully cultivated empathy, and combine these things to portray each moment with integrity and genuine compassion.  What you KNOW is almost anything you choose to know, for someone at some time has written about it.

I won't do a death blow on "Write what you know" because like most bad advice, it is just misunderstood.  It is like taking the most prominent ingredient out of a wonderful rich and flavorful soup and declaring that it is what matters (which probably means it will be as un-enriching as the water from the metaphor would be).  I will simply let "Write what you know" think about its ass kicking, lie there and bleed, and consider the ways in which it could be better advice in the future.
at October 25, 2012