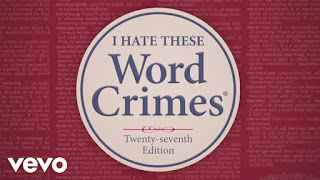 Weird Al Yankovic has included a song about grammar in his latest album.

The reason I know this is that last Tuesday, no less than half the posts on my Facebook wall were people sharing this video. Seriously, it was cat meme, Word Crimes, passive aggressive message to an ex, word crimes, what level someone unlocked on Zombiepirates, Word Crimes, a rant about progressive social justice*, Word Crimes, a post from someone I don't even know that keeps showing up in my feed because someone I do know keeps commenting on it, Word Crimes, an inspirational quote (maybe on a macro of a picture of someone who didn't say it), Word Crimes.  Then another cat meme.

You get the idea.

*There is a no less than 71% chance that the rant was actually me.

Also, my friends know I'm a word nerd, so I got a lot of private messages too. "Hey, I totally thought of you." "Hey did you see this?" "Hey this seems up your alley." I don't want them to stop thinking of me when they see these sorts of things, and I promised to stop self-immolating (no matter how frustrating Facebook became), so I spent part of the day twirling a tiny Phillips head screwdriver between my thumb and forefinger and contemplating the logistics of self-lobotomization.

Of course, Word Crimes isn't the brilliant manifesto on language that some of the more pedantically oriented are hailing it as. Many of these "crimes" aren't even wrong in formal usage anymore, much less in colloquial settings and the lyrics belie a tenuous grasp of linguistics at best. What made me wince was far less the song itself (which I will get to) and more the people lauding it as a genius grammar lesson.

Most rules like these, from fish forks to fashion to grammar, are "proper" primarily to create an artificial social barrier between classes and "other" cultures, and the "proper" making fun of the "improper" for doing it wrong is a long and illustrious tradition in our society.

When I teach English to my college students, especially when I get native speakers who use dialects like AAVE, I tell them that I am not teaching them the "correct" or "proper" English. As a country without a national language academy, that doesn't even mean anything. Most pedants in this regard have appointed themselves lords of language (even though they can't seem to agree with each other) and who spend their days tilting at the windmills of linguistic drift and being elitist about their dialect without realizing how classist (and often racist) that makes them seem. (Especially when they do their pedantry thing without regard to context like informal settings or colloquial usage.)

What I tell them is that I am going to teach them the rules that a very narrow group of people in power have determined is proper and who insist that if you can't follow THEIR rules of communication (even if they knew what you meant) that you will not be listened to and/or taken seriously. The powerful have a proclivity to demand THEIR rules be followed in order to parlay (anyone from social justice will instantly recognize as a derailing technique known as the tone argument) and what I am teaching them isn't "right" so much as it is the version that powerful people demand.

The reason I like Word Crimes is the same reason I like Nabokov or Frost even though they portray a pedophile and a self-deluding hypocrite respectively. I consider their work to be reflective, not didactic, and through the lens of a character. I mean I don't REALLY think Weird Al committed incest when he parodied Avril Lavine, stalked people like in Melanie, has a zillion guns like in Trigger Happy, or was ever a surgeon. I'm not even sure he likes rocky road or bologna or has spent significant amounts of time in a drive through. He is singing through a persona.

And frankly, there's reason to suspect that he's singing through a satirical persona. Weird Al does this A LOT. His lyrics are cute and funny and usually hilariously clever, but there is almost always a second level of irony going on as well. The characters who sing Weird Al songs are often more caricatures of some dubious belief or philosophy (from coupon clippers to TV zombies to belief in the paranormal to crusty old parents who had it worse when they were your age). In fact, one of the reasons Weird Al stands out among so many who do song parodies is because it's generally harder to find a song where he doesn't have a layering of additional irony, humor, and social commentary. And even though Yankovic has definitely punched down during his career, I don't think that's what's going on here.

Some of the rules he insists upon in Word Crimes are so anachronistic by today's standards (prepositions at the end of sentences) as to be absurd. The fact that he calls them "crimes" and demands people go back to pre-school or were raised in a sewer, as well as the entire raging tone, hints at the fact that Weird Al doesn't believe this is a legitimate position so much as the persona of the character singing the song is mocking the red-faced, frothing mouthed pedants who are (extra ironically) calling this song genius.

ETA: He even admits to putting "improper" grammar in the song intentionally to cheese off the grammar wanks. (It's in the first few seconds of this clip if you're interested.)

To put it bluntly, I'm pretty sure the pedants declaring this the most educational song ever--and lauding it as brilliance incarnate--aren't actually getting the joke. Weird Al trolled them. Hard.

What's not to love about a near perfect reverse ironic pedant trolling in a fricken hilarious song that explains the difference between "its" and "it's"? Plus nothing is funnier to an English nerd than a good dangling participle joke.


If you're enjoying this blog, and would like to see more articles like this one, the writer is a guy with a rent and insurance to pay who would love to spend more time writing. Please consider contributing to My Patreon. As little as $12 a year (only one single less-than-a-cup-of-coffee dollar a month) will get you in on backchannel conversations, patron-only polls, and my special ear when I ask for advice about future projects or blog changes.
at July 19, 2014