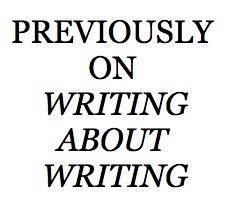 I left a story dangling off a cliffhanger after life exploded (twice) but I never forgot that you all needed to know what happened.

Well, buckle up because the exciting conclusion is coming.

See shortly after someone asked a question about my process a couple of months ago, I realized that I was spending a lot less time working on my fiction than I wanted to because of all the time and energy I was putting into Writing About Writing. Naturally, this caused one of my enemies to inhabit the body of a sexy looking woman, grab a shard of the Mirrorshield, pretend to be the person who asked the question, and flash it at me so that I would be paralyzed while my nemesis (ChronoTron) destroyed me.

Wrecking Ball showed up and there was a brief altercation, and it looked like I was going to get my ass saved , but actually the thing is that Wrecking Ball also has a nemesis named Harbinger. And Harbinger had come to the party just to finish what he left undone before. And ChronoTron had perfected a time dilation field that made him immune to Wrecking Ball's attacks.

With me paralyzed, my nemesis about to suck all the time from me, and Wrecking Ball fighting the one person who has kicked his ass definitively in the last five years (and who only didn't finish the job because W.B. looked dead and needed months of traction), things are not looking good for our intrepid heroes.