Tropeception (The Mailbox) [Part Two Revenge of the Trope] 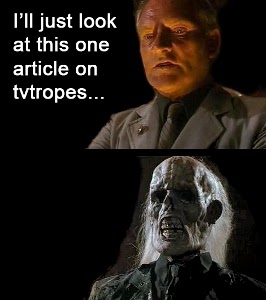 [Note: Cabin in the Wood Spoilers]

To some degree tropes help stories, just like grammar helps language. They give a reader a degree of familiarity expectation that can work for an author. A writer may not have to explain all the logistics of faster than light travel or how everyone understands all the languages in a science fiction story because that's a trope of science fiction. You can let certain things "run" in the background without a lot of exposition, and that's kind of nice.

However, there are tropes to avoid because they are tired and cliche, and there are too many to list here. Virgin births, orphan superheroes, the chosen one, the dark lord, the "strong woman," rape as lazy characterization, the ironic ship name, the planet that is all one ecosystem, beauty and morality on the same axis, hiding your illness from the doctor, aliens that have all one culture, person holding gun/gunshot sound/person falls over because someone shot THEM, a character who is the last of their kind, etc.... Like I said, there are so many that I would need orthopedic shoes, stool softeners, and dentures by the time I finished listing them all. It's not that you can never have one of these tropes. It's just that you have to work that much harder to earn it. It sounds like these are what your friends are talking about when they use the word trope, and they ARE tired and overdone.

But Chris, if there are so many, how can we possibly know them all?

Well, try not to do something you know you've seen or read a bunch of times. If you've seen it three or four times, it's probably out there ten billion more, and you should be careful. It's lazy writing.

There are also tropes that focus specifically on power dynamic issues that you should be very, very, very aware of. Racist, sexist, homophobic tropes, not to mention others. These are things you want to be extra careful about.

I'm not just talking about having all your muggers be black either (although that certainly would count.) There are plenty of tropes like the magical negro, the sassy latin maid, the prescient homeless person, overachieving Asians, effeminate villains, underprivileged but fiery Latinas, gays with impeccable fashion....these are tropes that aren't explicitly negative, but perpetuate stereotypes.

Come to think of it, you could probably just watch Glee for a while as a primer on what not to do. ~rimshot~

It's not that you can't have any character conform to any stereotype. Trying not to do that is difficult (and also its own trope). But don't give them ALL the tropes at once. And don't make the tropes the limit of who they are as a character. I may know several gay people who dress really well, but not only do I know a few who don't, but all of them have other places they defy stereotypes–some are masculine, most have firm wrists, and I'm still waiting to meet fucking ONE who loves Barbra Streisand as much as they're "supposed to."

In science fiction and fantasy there are some special ways tropes can come up to be careful about. The alien (or race) that is OBVIOUSLY modeled after the living embodiment of an existing stereotype. As much as I love Star Trek: The Next Generation, someone needed to get punched in the throat for turning the Ferengi into space Jews (complete with big noses...holy fuck). Using scary races to represent The Other (like orcs that are just plain always evil) for example. It's not that you can't have these things, but you should understand how they fit into modern literary criticism and (again) work to earn it.

And of course we have to talk about the trope of the white person who goes native and becomes better at the culture than the people themselves.  It's sometimes called White Savior, but I prefer "What You Folks Need Is A Honkey" or particularly (wait for it) the great white trope. It's overdone. It's offensive. It needs to stop.


THEN HOW THE FUCK DO WE DO USE TROPES?

So now we come to the last part of your question. What do you do about the fact that there are a bazillion tropes and no real way to avoid them?

You want to throw a trope in there? Earn it. Bring something new to the table. Flesh it out. Take on a new angle. The robot that wants to be human is as old as the idea of an automaton, but Data as a character gave the old trope new life. Now he is one of the most unique and instantly recognizable characters in modern science fiction, and everyone is copying HIM.

2) Defy your trope. (Though trope defying is itself a trope.)

Joss Whedon is constantly defying tropes. You expect a villain to monologue and instead the hero cuts them off by attacking. (He liked that one so much, he did it twice in Avengers.) The bomb is defused with hours to go and they all go laugh and get tapas. Set up the trope, but then have something surprising happen that defies it. It can be delightful.

You can always breathe a fresh new life into a trope by having a story that has never been done before. Tell the old trope in a brand new way. This is probably where the hatred for Pacific Rim has its strongest divergence--giant robots are old news. Giant robots fighting giant monsters old news. Dead brothers–old. Vengeance–old. Karate fights when they have guns....weird, but less old. But the two pilots thing and shoe symbolism....okay that's not so overdone. The idea of science rushing forward without regard for consequence is yawntacular. And if you just tell the same story over again you're never going to–OH MY FUCKING GOD DINOSAURS!!!

This is something that mostly plays into comedy, but acknowledging tropes by bringing attention to them can also be hilarious. Though beware, trope comedy is itself a trope.

5) Explain your tropes in a new way.

Remember Cabin in the Woods? How all those horror movie tropes like people not holding on to weapons, separating, or having sex in the most inconvenient spots turned out to be part of a master plan. It can be awesome to have some of those conventions given a little bit of their own back story.

6) Go beyond your trope.

I referenced Glee above. Before people start punching my address into their ICBMs hear me out. The show IS problematic when everyone conforms to their stereotype, but the reason people like Glee is that the characters often break out of their little trope bubbles. I haven't seen much beyond the first season, but I caught a moment where Santana called out Will for all the Mexican stereotypes he was using. Now I'm not saying Glee gets a pass at having all those stereotypes to begin with because it has a didactic lesson before the last commercial break, but that's why people defend it. That and the choral arrangements of 80s songs, of course.

Falling into the traps of tropes and cliches is one of the best reasons to put your writing through peer review. Sometimes you just don't realize what you've done. Get someone you trust to help you comb out a few of the tropes you're not married to.

Every story has been told. But not by you. As long as you avoid the REALLY bad tropes (unless you're prepared to REALLY earn them) are not lazy about incorporating more than a small handful of the "bad but not terrible" tropes (again, unless you want to earn them), give a shit that certain stereotype tropes are really quite offensive, and bother to bring something new or fresh to the table, your story will be uniquely yours. You will write a story with ineffable Mikeness about it, and no one can take that away. Yes, it will have frequently used literary devices, but it will also have your fingerprints all over it.

Hope that helps out, Mike! Good luck. (Although the Very Lucky Character is a trope.)
at January 08, 2015