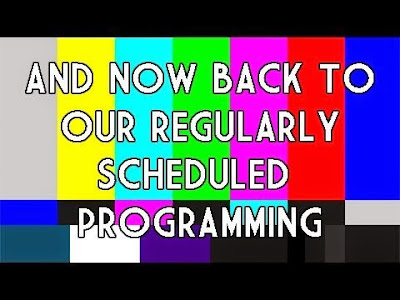 Even though I only missed a couple of days that I wouldn't have missed anyway (since my staff demands to get three day weekend holidays off) I still feel like I've been phoning it in for about a week, and I need an "I'm Back!" post.

The con was wonderful, but I probably didn't play enough games to do a con report "as a writer." I will, however, be publishing my LARP over the next couple of weeks--which is good because even though I've been pretty cheesy about getting posts up, I've actually been writing like mad. (The LARP clocked in at 50 pages by the end.) It will be awesome to give you a look at what I've been up to.

It'll take me until tomorrow to get completely back on track. We come home from the convention, drop luggage and go and take naps, so today is my first actual day getting to sit down and write.

Plus, there's something called "con crud," which probably anyone who has been to a convention (or even spends a lot of time on airplanes) knows about. All that recycled air with people, who are prone to ignore the beginning symptoms of illness because they don't want to miss out on games (or whatever), leads to a sort of creeping crud of cold-like symptoms that hit most people to some degree or another. Mine isn't too bad this year, but I'm a little stopped up and I've been needing a bit more sleep. Regardless, today I have the time to write, so by tomorrow, the entries will be going up on schedule.