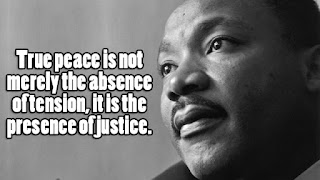 "Loose and easy language about equality, resonant resolutions about brotherhood fall pleasantly on the ear, but for the Negro there is a credibility gap he cannot overlook. He remembers that with each modest advance the white population promptly raises the argument that the Negro has come far enough. Each step forward accents an ever-present tendency to backlash.” (MLK)


"Dr. King was one of the world’s most eloquent speakers, a magisterial orator whose august style of delivery varnished even ordinary words enough to make them shine. He was also a great writer who seemed to have understood instinctively, whether he was writing a sermon, a speech, or a book, that he was writing for posterity as well as the times in which he lived. So today, I have decided to step out of the way and let King’s written words speak for themselves...." 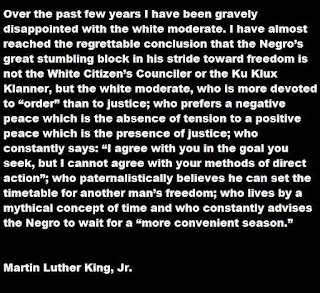 Reminder that we don't run a regular entry on bank holidays. We'll see you tomorrow.