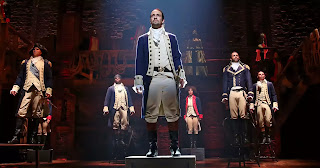 I had a thing come up suddenly, so everyone has a one day stay of execution on on voting in the first quarterfinal round of the worst page turner poll.

Today I will share with you one of the things feeding my current insatiable hunger for motivation and inspiration.
If you haven't seen or heard Hamilton, rectify this egregious oversight in your life immediately. A lot of the 101 level history focus on Alexander Hamilton is about his involvement in the American Revolution and the national banks, but the Broadway musical–in addition to being six kinds of amazing–really focuses on Hamilton's life as a writer. Unless someone is kind of studying the Federalist Papers, or really studying JUST A.H., it's a much lesser known aspect of his life. But the musical really gets into just how much writing he did.

Here are a couple of the most inspiring "writerly" songs from Hamilton, but if you haven't listened to the whole thing (especially if you're the kind of nerd like me who loves Les Mis, Phantom of the Opera, Cats and such), what the hell is wrong with you?