Social Justice Bard and the Tale of the Missing Outrage 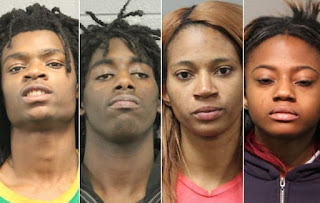 A lot of folks are asking why there's no outrage about the four Black teens who kidnapped and tortured the mentally ill white man. Allow me to talk, privilege to privilege, to my fellow white folks for a moment who seem to be wondering where the identical response is that would echo some things they are conflating as "equally bad" (and why that is a false equivocation). Why aren't we rioting? Why aren't we taking to the streets in protest? Why aren't their major movements crying out for justice?

1- There IS outrage. Even from the left. You're wrong. Full stop.

2- A million outraged posts demanding that there can never possibly be ENOUGH outrage reveals, and with breathtaking transparency, the fact that the true concern isn't this poor guy, or even that he sees some particle of justice. It's not even about "enough" outrage because there is no point at which this cry would be sated, and these folks would say. "Oh okay. That last bit made it enough for me. Carry on then." Rather it belies the political expediency of advancing a particular narrative. A narrative that "they" aren't outraged enough, so clearly "they" are the problem. Generously "they" could be broadly painted to be any "white-hating hypocrites on the left"; however, even a casual read of these calls for outrage reveals that it is more accurately any people of color and especially black folks. The narrative being advanced is one in which no amount of anger from "those people" is sufficient. And thus they must (collectively, as a group) remain othered, deserving of their social mistreatment, and undeserving of any legitimacy when they cry out for their own.

3- Though basically there are no "sides" and everyone agrees that this was CLEARLY a hate crime, even if they bring up secondary points, the oppressive social power differential here existed not along racial lines but against the mentally ill. This was a travesty of ableism and is a horrible example of yet another group dehumanized by rhetoric and slurs in a way that translates directly to violence against them. And yet there has been a conspicuous silence over other mentally ill victims of violent crime when the perpetrators are white or even in THIS situation amongst those for whom it is preferable to shoe horn the incident into a racial agenda of black on white violence. The very recent lack of jail time for the white football player who raped a mentally disabled teammate in his rectum with a hanger is a perfect example.

4- If you are outraged at how a disabled person was treated in this instance yet went to extreme pains to reconcile video evidence with how Trump wasn't mocking Serge Kovaleski, you aren't being any kind of ally to disabled folk. You are using them as a convenience for your racism.

5- Look at how very, very different this is from the situations that regularly get protested. National news coverage instead of a social media campaign that brought it to national consciousness. The mug shots are used instead of the senior portraits. The victim's physical state is blurred out in most media rather than a grisly display of bodily harm in a picture that cannot be avoided. No one is talking about how fucking good the suspects are at swimming or how they've ruined their promising lives. The media is castigating them. They were arrested almost immediately. They will likely spend their lives in prison. White folks kidnapped and tortured by groups of black folks is not a ubiquitous problem in this country as is evidenced by the complete shock. The whole situation radiates with EXACTLY the swift justice that is sorely lacking in the sorts of incidents over which protests happen. If this were the cultural and law enforcement reaction every time unarmed people of color were attacked and killed, there wouldn't be a need for such outraged protests demanding justice. The X factor is justice, and there will almost certainly be justice here. In fact, statistically speaking, no one will face harsher justice than black folk.

6- It is spectacularly clear that the agenda of the "where's the outrage" rhetoric is to delegitimize groups like Black Lives Matter that deign to voice their outrage on a social level at their mistreatment rather than quietly retreat to obscure libraries to write ever-so-diplomatic and academic papers quietly petitioning for redress from whites who will never read them. Even though the latter are protesting agents of the state getting administrative leave (read: a vacation) when they extrajudicially murder unarmed black folks. Or that black folks are stopped more, searched more, charged more, indicted more, found guilty more, and sentenced more harshly. The criminal justice double standard is what is at issue, not the fact that some cop ever had racial animus in their deep heart of hearts when they committed an atrocity. If they could get the kind of justice we've seen over this case, there wouldn't be a need for protests.

7- When folks wonder where the outrage is that must conform exactly to the narrative they want, and are using it in a sort of "Haha checkmate Black Lives Matter" way, they demonstrate a fundamental (and breathtaking) lack of understanding why there is outrage to begin with and what BLM is all about. Years on, and they still haven't even taken the time to intellectually grasp their message or to conceptually comprehend why this isn't a parallel situation. It is apparent that they still see violence that tracks along the lines of power dynamics as being random–that they still view guilt (if they see any guilt at all) as renegade bad actors. Those sorts of things DO happen, but violence that conforms to power differentials in a very clear and predictable pattern is FAR more common and receives far less justice when it does happen.

So when people (over on the "non-outraged left"–which is actually complete bullshit) treat those demanding outrage like you maybe aren't doing a good faith script flip (and believe me, this social justice bard loves him some script flipping) it's because they aren't slick. It's REALLY obvious what they're trying to do, and that they're practically orgasmic at the thought of being the victim for a change so that you have the justification to go right on ignoring movements for social equality.
at January 13, 2017