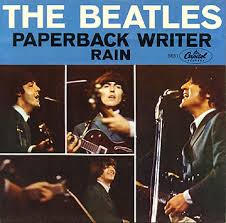 Ever a reminder what NOT to be.

I love the Beatles, but I love their later stuff more when they were way to famous for a record label to force them to be bubble-gummy.  Plus their production values went up and they had more complex instrumentation.  Much like their critics, I really start paying attention at Elenor Rigby.

And oh my word do I ever have an unhealthy love for Sgt. Pepper's Lonely Hearts Club Band.  That's probably one of my all time most played albums.  (Even more than Ke$ha if you can believe it!)

But I love Paperback Writer.  It is forever, for me, a reminder of the pitfalls that surround writing, and that many of the themes of writers wanting to break into the industry were already tired and worn out cliches worth poking a bit of fun at....even forty-five years ago.

I also think the "controversy" of Lear is easily solved if you consider how many pretentious writers claim to be reproducing a style when they so obviously know nothing about it.  ("This is chick lit crossed with superhero fiction crossed with gritty western all set in steampunk....but literary") You can't get much further apart than a nonsense poet and popular commercial novels.  Not without adding complex lit analysis into your pop song.

It is ever a reminder to me to keep working, keep working hard, and keep working to improve the quality of my writing (not just to write more words).

It's a dirty story of a dirty man
And his clinging wife doesn't understand.
Their son is working for the Daily Mail,
It's a steady job but he wants to be a paperback writer,
Paperback writer.

It's a thousand pages, give or take a few,
I'll be writing more in a week or two.
I can make it longer if you like the style,
I can change it round and I want to be a paperback writer,
Paperback writer.

If you really like it you can have the rights,
It could make a million for you overnight.
If you must return it, you can send it here
But I need a break and I want to be a paperback writer,
Paperback writer.