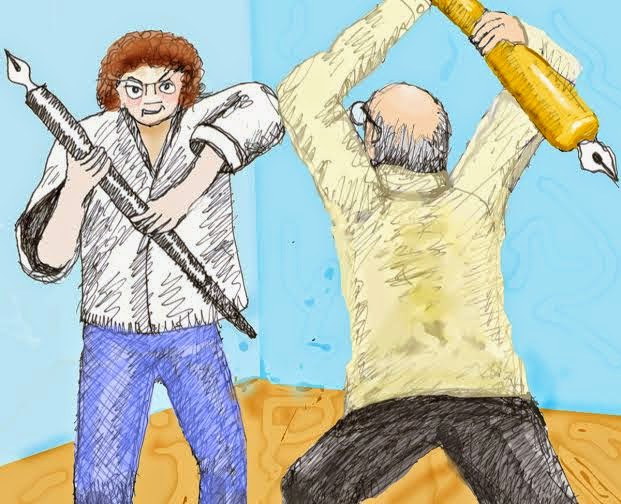 [Please join me in welcoming Laura Shefler as a guest blogger here at Writing About Writing. I hope you all enjoy her elegant, direct prose and poignant story as much as I did.]

The Man with the Golden Pen

How proud I am to have you as a daughter. Something in the circled sentences on the attached page tells me that you haven’t learned one of the most important tricks of the writing trade. I was twice your age before I learned it. If you want to talk about it, let me know.

This was a note that I got from my dad when I was in my mid-twenties and working as an associate editor for the University of Pittsburgh’s alumni magazine. Written on a piece of dad’s mini-stationary, the message came stapled to a photocopy of an article had written for the latest issue. He had indeed circled a couple of sentences, and I couldn’t see anything wrong with them.

Pitt Magazine was a vehicle for public relations fundraising, yes--and a publication with high literary standards, if I do say so myself. We worked long, intense hours, the editorial staff, most of us graduates of Pitt’s equally intense writing programs, rewriting, clarifying, polishing, banging out heads against the wall to try to dislodge a witty transition or sparkling headline. Only years later did I realize that not everyone has to put in that much effort to earn a living.

Anyway, my dad’s note was a clear violation of the agreement that he and I had reached that he would stop pulling his golden Cross pen from his shirt pocket and marking up my already-published articles. When he did this, I felt tortured. In those days, I was simply excited to have written something. Even more importantly, I had said something about the importance of some professor’s stem cell research or the tension at a campus event where US Vietnam War veterans had met with a visiting veteran of the Viet Cong. (The Americans were asking the visitor about months and years and places, trying to figure out, in all earnestness, whether they and he had been trying to kill each other.) At that point in my life, I wanted acknowledgement for my content rather than tips about style.

But I have so much experience, he had pleaded with me. I just want to give you what I have to offer as an editor.

I already have an editor, I answered. I need you to just be a dad.

It was true that he had a lot to offer a young writer. From his Depression-Era, no-heat, dandelion-leaf-eating, outhouse-using urban childhood, he had made himself into one of Pittsburgh’s best-regarded corporate writers. The vigor of his prose, along with the relatively lavish business culture of that age, enabled him to command an hourly rate that I will never see, even after decades of inflation.

He wielded an elegant and encyclopedic fluency with grammar and style, and I took to heart the five-page memos he used to hand me when I was in high school on issues such as comic timing, the pros and cons of the Oxford comma, and the proper use of that and which.

All the same, this unexpected note, sent through the U.S. postal service even though we lived only a few miles apart and saw each other once or twice a week, made me scream with aggravation when I read it. In the privacy of my narrow apartment kitchen, I doubled over with the kind of family-motivated rage that I knew was better to exaggerate than repress. I let loose with the kind of obscenities seem to be required for a guest post on this blog, but I’ll leave them to your imagination.

In general, I believe that writer should receive feedback with grace and maturity. Accordingly, I went to next day at work and gracefully, maturely yanked his subscription to the mag.

Six months later, though, he mentioned that he hadn’t been getting his issues, so I put him back on the mailing list. We worked out a new arrangement, where he would do his editing right in the printed magazine and then put them on a shelf in a seldom-used small bedroom. I was free to look or not look at what he had done. Eventually, as I grew more self-assured, I did check his suggested changes.

Most of the time, his edits were dead-on. Other times, where he was applying out-of-date standards, overly formal for magazine writing, I could see the reasons for his not-quite-appropriate advice and shrug it off as no big deal. Still, I never asked him about the circled sentence on the attached pages. I needed him to know that I was serious about my boundaries, and so one of the most important tricks of the writing trade went with him to the grave.

Ultimately, though, the most nurturing gift that my father offered me as a fellow writer was his jealousy. In Bird by Bird, Anne Lamott writes eloquently about the green-eyed loathing that one writer feels for the success for another. My corollary is that being on the receiving end of the envy provides shameful, delicious satisfaction.

One day he just came out with it, my dad. He, too, was a graduate of the University of Pittsburgh, as were many of his old friends, and they, too, got Pitt Magazine. (And so did most of the educated folks in the city. You know you’ve made it in the ‘Burgh when your doctor’s receptionist recognizes you from your byline.) Some of them were also writers. One was a Third Circuit federal judge.

They were phoning him, my dad finally informed me, and leaving messages on his answering machine about how much they were enjoying my writing. Why, my father blurted, aren’t they leaving messages about my writing for me? Consummate bluffer that he was, he could have hidden his feelings, but he chose to share them, for my benefit, I’m pretty sure.  Confiding in me, albeit in this plaintive tone, was his way of letting family bonds take precedence over collegial rivalry.

Still, in my imaginary Hall of Fame for difficult relationships, Father-and-Daughter and Writer-to-Writer wrestle for the title of Most Fraught, stirring up a ruckus in my soul.  It’s a good kind of ruckus, though—a resource for me as a writer, an inner thrashing that works through me, enabling me from time to time to throw a few energetic words onto a page.

[Laura Shefler is a writer, artist, writing coach, and tutor in Albany, CA. She blogs about life forces, creative processes, and the occasional identity crisis at Title to Come (http://laurashefler.net/blog). She also plans to stop procrastinating and get a better blog title, really, really soon.] 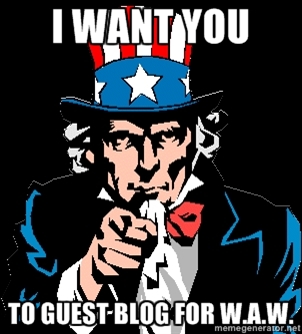 If you would like to guest blog for Writing About Writing we would love to have an excuse to take a day off a wonderful diaspora of voices. Take a look at our guest post guidelines, and drop me a line at chris.brecheen@gmail.com.
at April 17, 2014