But Don't Take MY Word For It 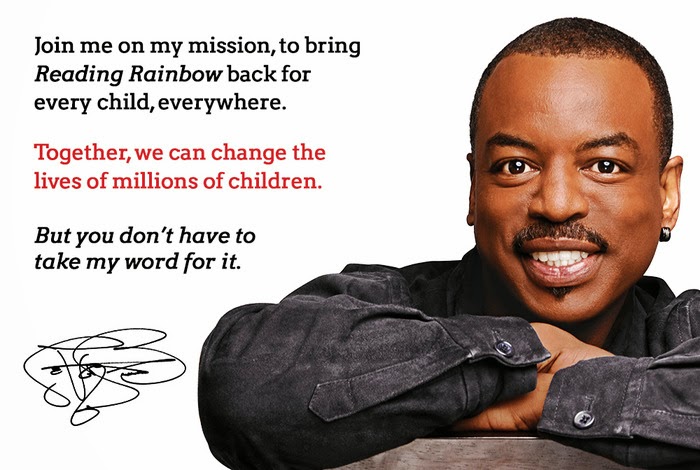 For 1 month only, 1/3 of Writing About Writing’s proceeds will go to Reading Rainbow’s Kickstarter.

So as some of you know, I donate 10% of all the money we make here at Writing About Writing to a local children's literacy charity. Usually this goes to my very local branch of the Oakland Library, earmarked for their children’s literacy programs. I walk it over there with The Contrarian if it isn't too hot or raining. But a couple of days ago, I noticed that Levar Burton had launched a Reading Rainbow Kickstarter.

So for June, we’re going to do that instead.

I was already nine when Reading Rainbow debuted, so it was mostly something I watched when I was home sick from school and even then I usually was a bit too old for the books that they talked about. I think by then I was mostly reading Judy Blume, Beverly Cleary, and Roald Dahl.  But I remember watching other reading shows on PBS like Follow the Yellow Balloon in kindergarden and being very excited to find the books they talked about. Also, I couldn’t help but notice how powerful Reading Rainbow's influence was in getting younger kids to read.

So for ONE month, from today until June 30, (The Reading Rainbow Kickstarter ends on July 2), I will keep tabs on every penny that W.A.W. makes, and give the normal 10% of our proceeds to the R.R. Kickstarter instead of the Oakland library.

NOT ONLY THAT, but instead of the 10% we normally save in Hen Wen to go toward improvements in the blog, I will kick down that 10% to the Kickstarter as well. (20% total.) Hen Wen will cry bitter tears, but I'll deal with her.

And because I’m a humanities major (who did an oral report on fractals for my final in a class called "Math For Liberal Arts"....7 years ago) and because math is hard, I will just go ahead and throw in the extra 3 1/3% and make it an even third.

So for one month only, 1/3 of W.A.W.’s proceeds will go to the Reading Rainbow Kickstarter*.

Obviously if you just want to fund the Kickstarter, you should just go fund the Kickstarter, but if you’ve long thought to yourself “I should send that Chris guy some money for filling my days with merry chortles and the occasional guffaw, now is a great time. Plus, if you turn off your ad blockers for chrisbrecheen.blogspot.com I will get a penny or so for every hundred page views. (And you might see an ad you like since they’re targeted to be about books and writing.) Now is a great time to share a couple of your favorite classic articles from THE RELIQUARY on Twitter or Facebook.

And hopefully we can help a lot more kids fly twice as high as those loser butterflies!

*I know there are some quibbles about this Kickstarter. It’s already hit its goal. It’s technically funding a for-profit company. The tablet app is going to end up requiring a subscription fee. However I know they want to cover the subscription fees for underprivileged schools, and they've already stated that if they reach FIVE million, they will make the subscription free for 7,500 schools. 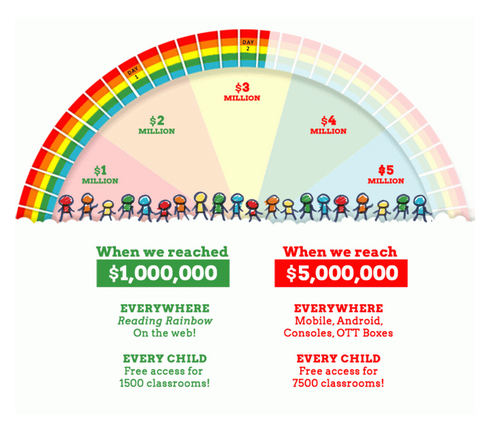 This is literally what I want to do, but on a global scale.

The success of this Kickstarter also may open up a new way I can work with the Oakland library. While I love giving them money earmarked for their children’s literacy programs, I would love even more to be part of a tangible, concrete project instead of just handing them a check, and if Reading Rainbow the app is a reality, then I can do something like buy them tablets so that kids can go there to watch R.R. (or pay their subscription fee…or both). I think that would be a really awesome.